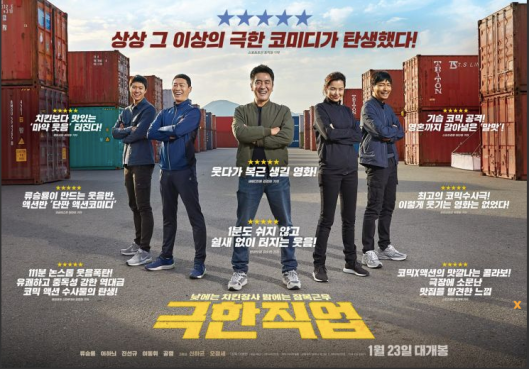 Extreme Job is the name of upcoming Korean film which stars Ryu Seung Ryong in the lead role. The title of the movie hints at something serious as the subject matter but it is actually a comedy which is about a team of five detectives who are part of a drug squad. Apart from aforementioned actor, the unit is formed by Honey Lee (Modern Farmer, Please Come Back Ajhussi), Jin Seon Kyu (The Outlaws — for which he received Blue Dragon Award for Best Supporting Actor in 2017, Six Flying Dragons), Lee Dong Hwi (Answer Me 1988) and Gong Myung (Feel Good To Die). The team goes undercover as employees of a chicken restaurant in order to take down a criminal organisation but their restaurant unexpectedly becomes very popular.

I love the set up and a comedy film becomes all the more interesting and fun when we have multiple interesting characters and amazing actors to play them. Extreme Job is hitting the theatres on January 23. It is directed by Lee Byeong Hun of movie Twenty fame. Acting powerhouse Ryu Seung Ryong was last seen in Korean film Seven Years Of Night and will soon be making drama return with Netflix’s sageuk thriller Kingdom.