The King Of Dramas is totally a fun ride. It is filled with amazing characters and tells the behind-the-scenes story of drama world in a very interesting way. It’s a breezy entertainer and it’s got its heart in the right place. It can be rightfully called one of the best comedies in 2012. It’s one of those shows that encourages you to laugh out loud, to embrace its characters and to make the journey with them.

The story is, as said earlier, about the television industry. Anthony is the powerful CEO of a big production house, who is known to be  perfect. He is committed completely to the dramas he makes, and his sole aim is to give his shows, high ratings. Some unfortunate incident leads him to lose his job and reputation. The drama then progresses with his struggle to regain his position and in the process, he is helped by a rookie writer. An arrogant top star is also present in the scenario, along with Anthony’s first love, a top actress.

The King Of Dramas is successful in giving us a good insight into the drama land. The drama is full of awesome characters: be it Anthony, who solves each problems coming in his way by the most amusing ways and keeps us on the edge of our seats with the question ‘what will Anthony do?’; or the egoistic, kind of immature top star Kang Hyun Min, who is so funny, or our heroine Lee Go Eun, who knows how to make her point. Even the supporting characters are so brilliant. I really liked the World Productions staff, director Nam, Lee Go Eun’s mom, PD Goo and Hyun Min’s secretary and manager, to name a few. They are well defined and make you care for them. 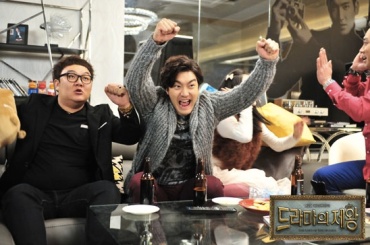 Another strong point is the comedy. The show gives you lots of moments of laughter as well as smile. The show is filled with crazy shenanigans. Romance is somewhat low key, but really sweet and tender. I liked that the second lead is not involved in a love triangle (that has become too cliched now) and has his own story to tell. The positive energy and fast speed is another commendable aspect here. I can call this show truly feel-good. The OST is good, but I really liked the Tuesday Song, so soothing and refreshing. The King Of Dramas never gets boring, is filled with crackling dialogues and keeps you engaged throughout. The camaraderie between the whole cast is spectacular.

Of course, the drama takes a melo turn in the later episodes, but that does not divert us from the enjoyment element. But it makes the starting perception about  the show a bit dimmer.

As I said, the characters are amazing, as are the actors who portray them with first class acting. Kim Myung Min is as awesome as always. He makes his role totally believable and delivers an excellent performance. Jung Ryu Won looks beautiful and  adds a freshness to her acting. Choi Si Won is the drama’s biggest revelation. His expressions, comic timing and looks: everything is terrific. Oh Ji Eun has also acted well. The show consists of superb supporting cast, which gives a stellar performance.

The King Of Dramas is completely a fun ride, takes you to the happy place, and has a heart as well.