Dating Agency: Cyrano is charming, cute, breezy, refreshing, sweet, warm and has an indie vibe to it. This has become my favorite drama of the year or at least one of them. It is the fourth installment of the Oh! Boy series of cable channel tvN and after watching two of them (the other one is Flower Boy Next Door), I can say I like this the most.

The drama takes its premise from the 2010 movie Cyrano Dating Agency, but is actually miles better than the film (which is one of the most boring movies I’ve ever seen.) The drama keeps the things simple and light and cheerful. So it’s about a theatre producer who starts an agency to help people in their love lives, in order to pay the debts he has because of a theatre. In the process, he is helped by two guys and a new recruit, a girl, with whom he falls in love eventually.

The show is filled with adorable and well written characters. Our hero is practical in his ideas of love but he also believes in it. He is not a complete cold fish, but is quite cool with a great sense of humour. He loves to stay in his emotional comfort zone but reluctantly starts falling in love. The heroine has an exact opposite notion regarding love: she believes in the fantasy of romance and she is one of my favorite female leads of dramaland: she is honest with her feelings, straight forward, warm, friendly and really sweet. Basically, she is the heart of the series. Then we have Moojin, who is an engineering expert and a robot with a heart. Go Ahrang is the cutest and the youngest of them, who is really sweet. And finally, the mysterious Master as the restaurant owner next door. Last but not the least, the two goons who are really hilarious.

The main thing which made me fall in love with this show was the unexpected romance between our leads as the movie didn’t have one. I loved their interactions: be it the bickering or the romantic tension  and eye locks, I enjoyed every bit of it. I liked that despite not being the main centre of attention in terms of love line (as there were different cases to fulfill that), we were always aware of their growing attraction. We could literally feel the sparks flying between them. I felt so giddy with excitement on watching their scenes. I also found it cute how our other two agency members played cupid for the OTP in their own adorable ways. 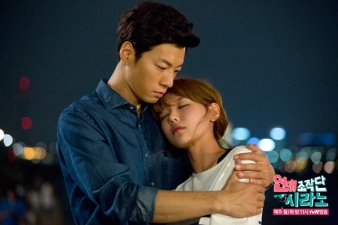 The other thing I liked was that the agency always left room for natural elements and feelings as well even when it orchestrated the set-up to help their clients. I was entertained by all the stories and the cameo by so many actors was like icing on the cake. I loved how these cases resonated with our main characters’ life trajectories.

The drama is light and feel-good but it has depth in little moments and its heart is at the right place. It is not at all shallow. The direction is crisp and fast paced. There is no unnecessary angst, over the top emotions or negativity, even the noble idiocy bit is short and reasonable up to some extent. I also liked the romance between Moojin and Hye Ri, so adorable.

The soundtrack for the show is one of the outstanding features. All the songs are amazing and appropriately placed. The drama did fade in the second last episode which was spent in a kidnapping sequence and I think it should have been cut short. But that is just a minor complaint from me.

Actors are excellent in this drama who never miss a beat. Lee Jong Hyuk is simply mind-blowing and charismatic in this role. He plays his character with ease and great timing. Sooyoung is a revelation, who makes her character really sweet and believable. She oozes warmth. Together, these two are electric with smoking hot chemistry which can be felt right from the first episode. Lee Chun Hee is awesome as the calm and composed, yet strong chef-cum-loan shark. He adds a great mysterious and graceful layer in his role. Hong Jong Hyun is perfect in his role where he managed to show emotions even when he was expressionless. Jo Yoon Woo is really cute and delightful. Bae Sung Woo and Kim Min Kyo are great as the two goons and provide lots of laugh. All the actors who did special appearance are pitch perfect. The whole cast has a great camaraderie with each other.

I’m not sure if you will love Dating agency: Cyrano to the same degree as I did, but there is a hundred percent guarantee that you will have fun and a smile while watching it.