She Was Pretty is what I would call a kdrama rom-com in its truest sense. But in a good way of course. It is easy, feel-good, romantic, funny, full of typical love ballads, love-squared and add all other good adjectives for a kdrama minus all the melodramatic and sad ones. Nothing great, but exciting enough to make it a pleasant ride.

The plot is similar to movies like The Truth About Cats And Dogs or Mujhse Dosti Karoge or classic Cyrano de Bergerac from where all this began. Kim Hye Jin is a girl who was exceptionally pretty when she was a kid but somehow she adopts average looks when she grows up (I don’t personally think so!). Her first love from childhood aka Ji Sung Joon was an under confident, average boy who has now become a very handsome man. When he comes back in her life, she doesn’t want him to see how she has changed and thus asks her best friend Min Ha Ri to pose as Hye Jin and meet him. Then there is Kim Shin Hyuk who is Hye Jin and Sung Joon’s coworker as somehow they end up working in the same company. 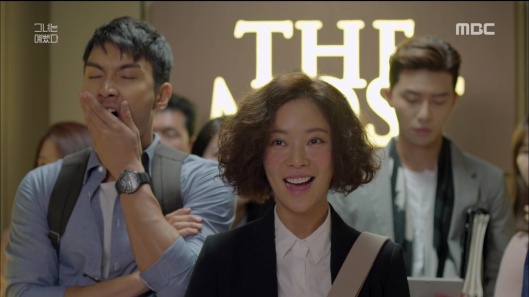 I really liked She Was Pretty as I’m basically a fan of such stories. It’s great to see how the hero falls for the real girl even though he thinks the one he loves is someone else. There is gratification in seeing that the heroine, despite her misbelief that she is not good enough, gets closer and closer to the one she loves and is trying to ignore. I think this whole scenario is perfectly shown here. I was rooting for the main couple, even if I had issues with Sung Joon. I felt giddy in their romance and couldn’t wait for them to finally meet. 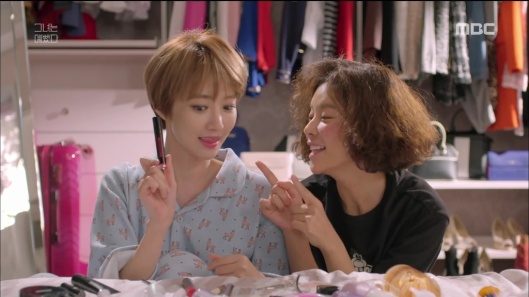 The highlight of the show is Hye Jin who provides heart and energy. Although I’m tired of too much optimistic behaviour of candy heroines, I found Hye Jin very likeable and sweet. On the other hand, it was hard to like Sung Joon who was very cold and harsh and there was nothing to explain some of his irritating behaviour. But he improved a lot as the drama progressed. I loved their interactions and romantic trajectory. It helped that I was totally in love with the song Sometimes by Zia which kept on emphasising the feelings.

I’m glad that the drama never made fun of the heroine or put too much emphasis on outer beauty. Even if she got a makeover, it was a natural thing and no one reacted in an over-the-top way. Even Sung Joon, the hero, never said anything about beauty. If he was annoyed, it was because how Hye Jin acted and not because how she looked.

My favorite character was of course Shin Hyuk who was very caring, witty, smart. I would have preferred if there were no romantic feelings involved as the friendship between him and Hye Jin was pure gold, especially when he called her Jackson. So funny and cute! I liked Ha Ri initially but when she took her lies too far, she reached the annoyance level. I loved the sister-mance and this is a rare show where two females love each other with honest feelings. It was great to see them together.

Then another great thing was the office which forms the backdrop of our story — The Most. The whole staff is good-natured and fun, especially the editor-in-chief Kim Rara — so eccentric and funny.

Once the leads were together, the show lost its steam. There was the whole issue of The Most to be resolved, as was Hye Jin’s career path. But it wasn’t interesting enough to maintain my interest. Also, the drama didn’t handle Ha Ri’s arc efficiently, relegating her role to mostly pinning for unrequited love.

In addition to this, there were many scenes where Hwang Jung Eum over acted and brought too much energy to the scenes and it was really annoying. But I have to say there were many instances where she was really good, especially the subtle ones. She also showed good comic timing. Park Seo Joon looks very handsome and plays his role effectively. Go joon Hee is good and Choi Si Won is fantastic. Hwang Suk Jung is another awesome casting.

All in all, She Was Pretty is a light, easy watch which delivers the message about the importance of inner beauty.