Chicago Typewriter, the upcoming fantasy drama on tvN, caught my attention just by its interesting moniker. And then came the cast of Yoo Ah In, Im Soo Jung (making a small screen comeback after 13 years!) and Go Kyung Pyo, the story mixing mystery and fun. And finally comes the posters, which look classy and intriguing.

The drama has writers at its center, with Yoo Ah In playing a bestselling novelist who is going through a writer’s block. He then hires Go Kyung Pyo as his ghostwriter, who in turn wants to make a deal. Then there is Im Soo Jung as our hero’s huge fan but turns into an antifan due to some reason. The icing on this normal looking three character story cake is the fact that all these people are reincarnations of writers who lived in the 1930s, when Korea was under Japanese rule.

I have to say Chicago Typewriter is arriving on our screens at lightning speed. It just recently got announced, then casting happened and now the time for its premiere is almost here — 7 April. Mark it with bright shiny marker!

I like the first poster which features all three main leads in an old photo, which I’m assuming is their first life, all with old charm and hats. Then there are three separate photos of them, each having a distinct colour background and typewriter. Of course the key to all secrets must be lying in that thing. 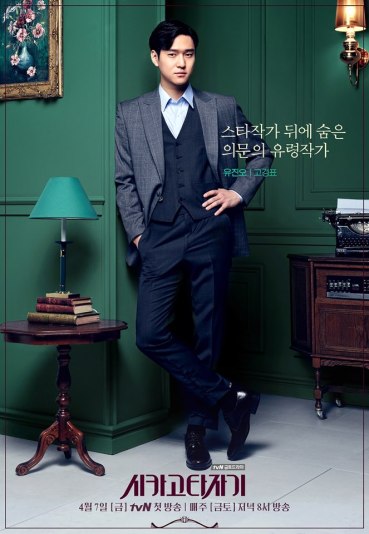