If I had not seen Pretty Noona Who Buys Me Food (or Something In The Rain), I would have been excited for the premiere of MBC’s new romance One Spring Night. It comes from the same PD (Ahn Pan Suk — his other shows include acclaimed Heard It Through the Grapevine, Secret Love Affair and The Wife’s Credentials) and writer team. I liked the first few episodes of the former immensely, the low-key old school mood, chemistry, subtlety. But soon many things started annoying me, not to mention extremely unnecessary slow pace and multiple flashbacks. Well, I’m trying to be open-minded about One Spring Night as I did love the maturity and moody vibe of Pretty Noona Who Buys Me Food, plus, Jung Hae In!

The drama stars Jung Hae In, Han Ji Min and Kim Joon Han in the lead roles. It has already aired its first episode as it premiered yesterday in the slot of Wednesdays and Thursdays. Simultaneously it is also airing on Netflix. The show stars Jung Hae In as a pharmacist and Han Ji Min as a librarian. She has a longtime boyfriend, played by Kim Joon Han (The Drug King, Prison Playbook). But of course, love happens between our two main leads. I’m surprised to see Han Ji Min so soon in a new drama after her recently wrapped The Light in Your Eyes. The story sounds simple enough but I’m sure it’s going to have many layers and pace of its own to tell its story quietly. And I’m sure it’s going to have a beautiful cinematography. 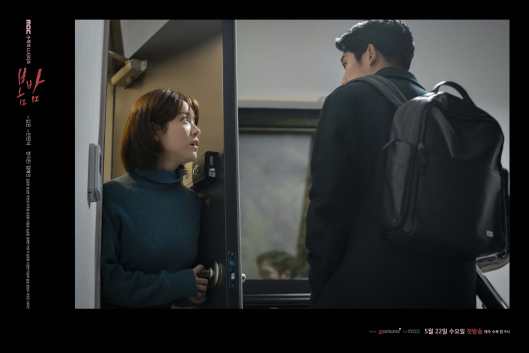