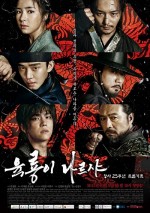 It’s that time of the drama timetable again, when the screens are flooded with dramas and more dramas and it becomes a herculean task to choose and accommodate them in our schedule. So if you are enticed by every show on the list, be prepared to burn the candle at both ends. I hope this list will at least help in the clarification of what dramas are going to start this October and so here we go! END_OF_DOCUMENT_TOKEN_TO_BE_REPLACED

The Monday-Tuesday slot over at KBS had been airing a pretty light-hearted drama in the form of Eccentric Daughter-in-law from a few weeks and the show ended its short 12 episode run last week. It passes the baton with same cheerful, bubbly tone to the follow-up drama Sassy, Go Go (yes, the title made me groan too). The show is actually in the line of School series as it’s about the trials and tribulations of being a high schooler. But the tone of Sassy, Go Go looks far more happy and gleeful than the shows of its ilk. END_OF_DOCUMENT_TOKEN_TO_BE_REPLACED