Finally we have the stills of Lee Jong Suk as the doctor in his upcoming drama Doctor Stranger and I think he still looks like a high school boy! Yes, there is a lot of seriousness on his face and very solemn expressions and all, but he is looking so young. Anyway, I’ve watched enough Kdramas to not make this a point of issue as we have digested so many weird and impossible shenanigans (for example, cross dressing without getting caught) that this one seems quite normal in front of them. Anyway, the young look aside, I’m also not liking the hair style for both him and Park Hae Jin as it gives a very dated feel. But both are looking good nevertheless.

I love the other set of stills with leading lady Jin Se Yeon where both the actors are enjoying a bike ride. A nice, warm bicycle ride is a perfect romantic setting and the pictures look breezy and light-hearted, and spectacular.

Coming on to the drama, Doctor Stranger is a medical spy story about a genius physician who is born as a South Korean but brought up in the North. He later takes a job in the South but feels as a stranger. Jin Se Yeon stars in double role — one is our hero’s first love back in the North while the other one comes in his hospital later. I think the stills belong to our leads’ blissful days of love when they were together in the North. Park Hae Jin plays another genius doctor and of course a rival to our hero.

The synopsis doesn’t clearly delineate what to expect from this story but I’m very hopeful that everything will fall into place once the drama starts as the PD has directed some of the brilliant shows like City Hunter and Master’s Sun. And I actually like this hidden information as it is not as much fun when we already know a lot about what is going to happen beforehand. 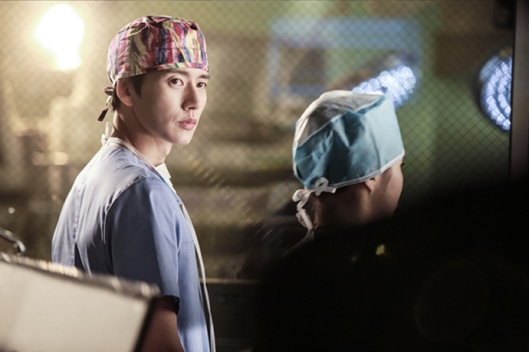