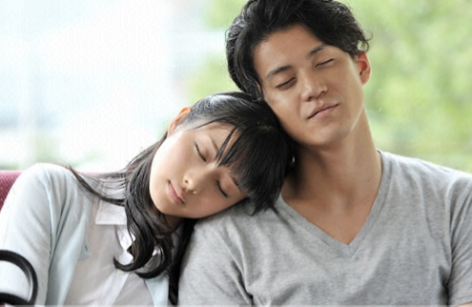 Rich Man, Poor Woman is a charming little drama that is partly a love story and partly a workplace drama which gets its best feature from its endearing characters. It is breezy, light and upbeat show with a delightful couple at its heart. Add an exhilarating soundtrack and you get an elated 11-hour journey.

The drama is set amid the world of IT sector where our hero Hyuga Toru is an IT genius CEO of a firm called Next Innovation, who is a self-made man and started his company with his friend Asahina Kosuke. They both struggled through various phases to reach their current successful position. Our heroine Natsui is a university student who is struggling for a job even though she is doing well in her studies. The drama then takes us into the blossoming love between our protagonists as she starts working for him and also the downfall that our hero faces and how he comes out of it in glorious victory with determination and hard work.

This is my first J-drama and I can easily see the differences it has with our Kdramas. There is lighter touch in treatment, absence of overly emotional tracks that can become very maudlin in case of certain Kdramas, the shorter length and focussing on various aspects rather than only the romance. But then the lack of more emotional threads can be a minus point as well. That is not to say that RMPW doesn’t have a heart or emotions, but the thing is it takes a normal exploration in this field.

If you take the love story of a rich man and a poor woman, it may sound like a done to death concept. But the formula gets a fresh coat of paint here as we meet two different players who complement each other quite well and have certain refreshing personalities. Our hero Hyuga suffers from face and name recognition disorder. Medical theme aside, he is also socially awkward with only focussing on work. Our heroine has a memory like a computer where she has the ability to learn quickly and recall everything, anytime. They are perfect for each other as he learns to care for people around him while she gains more self-confidence in his company. Their companionship, peppered with bickering and care, is the crème de la crème of RMPW. I found myself giddy with each and every scene they shared. It is a sheer delight to see them together.

The other part of RMPW is formed by the friends and founders of Next Innovation, Hyuga and Asahina. Their initial struggles, prosperities and then finally jealousy taking its roots in Asahina’s mind, leading to the broken relationship. I also loved how the drama portrayed the rebuilding of Hyuga’s confidence and the way he got inspired by Natsui.

We can also see the difference than normal Kdramas in that the drama never emphasised on the birth issue of our hero and took it normally. Also there are no clinging second leads — which is always a breath of fresh air and relieving factor.

Though the drama works at a brisk pace, I did get annoyed by the unnecessary separation between the leads in the last two episodes. Bring them together and you get the gems of the drama. There is unmistakable feel of paying attention to other elements rather than solely focussing on the romance, which I liked as well as disliked. Certain scenes involving workplace hijinks did get tedious to watch.

Oguri Shun simply charms you with his natural acting and nuances—his dialogue delivery, body language, facial expressions—everything just defines his genius but nerdy character. Ishihara Satomi is absolutely adorable and she is one the cutest heroines I’ve ever seen. They both have a very delightful chemistry—being their best when together. Other actors are all fit in their roles.

In a nutshell, Rich Man, Poor Woman is a cheerfully unpretentious drama with an endearing couple. Served with simplicity, it has layers of romance and workplace antics and gives life lessons of warmth, determination, self-confidence, importance of people around you and team spirit.