It’s true that I’m not entirely onboard the final main cast of upcoming music-rom-com She’s So Lovable and have my fair share of worries but one look at Rain in the show’s script reading stills and my inner fangirl is all happy just to see him and has become excited again. Who cares if the drama has a mothballed premise — it has Rain! And he is looking so young! And short hair equals my ultimate favorite hairdo for men. I simply hope that the drama will also be good enough to justify my enthusiasm. The complete cast was present at the table reads with Krystal, L, Hoya, Alex, Cha Ye Ryun, Lee Cho Hee and veteran actor Park Young Kyu, who was absolutely fantastic as Ji Sung‘s father in Protect The Boss. Hey, I also spotted Jo Hee Bong in the stills, who will be reuniting with Rain as both worked in Fugitive Plan B where he played the detective from Thailand. Among the new additions for She’s So Lovable, Alex is playing Rain’s best friend and agency’s vocal trainer where Rain is the CEO. Cha Ye Ryun has taken on the role which previously Im Joo Eun was about to do — rival to Krystal’s heroine and also a director at the agency with a crush on Rain (not her fault: who wouldn’t have a crush on him. LOL). Lee Cho Hee is starring as Krystal’s bestie. Even though these best friend characters are present in like every drama out there but still I love them because yay for some female friendship.

She’s So Lovable is about the music industry with Rain as the genius songwriter and producer who is cold-on-the-outside-sensitive-at-heart hero and falls in love with his dead girlfriend’s sister, played by Krystal who is also an aspiring singer. It is scheduled to follow It’s Okay, It’s Love on SBS. Color me excited—you don’t everyday get a chance to see Rain for 8 continuous weeks 🙂 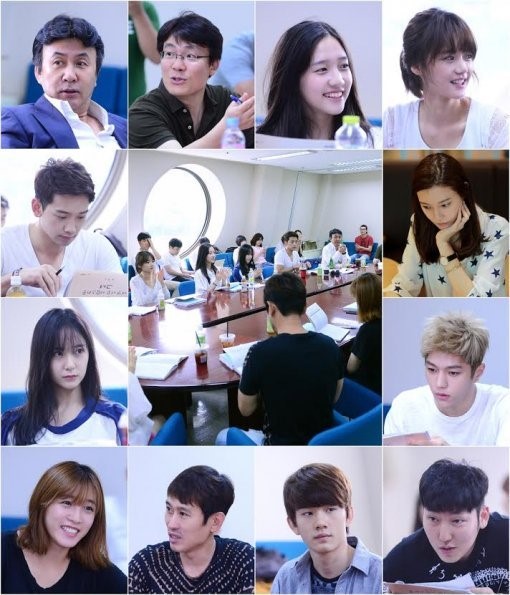 9 thoughts on “First script reading for ‘She’s So Lovable’”