It’s a well-known fact in The Drama Corner arena that 2004 movie My Little Bride was my entry into K entertainment. I absolutely loved it! I was hoping for a Kim Rae Won and Moon Geun Young drama reunion as their pair was so cute in the film. Well, we do have a reunion from that movie but it’s male lead Kim Rae Won and female lead’s best friend Shin Se Kyung that are going to star together in upcoming KBS fantasy drama Black Knight. I’m glad I watched Girl Who Sees Smells as it changed my initial cold impression of her and found her really bubbly and charming in it. Black Knight also stars Seo Ji Hye (Whisper) in an important role.

Black Night features Kim Rae Won as a successful businessman who had an unpleasant childhood. He is mature, thoughtful and humorous. He risks his life to save the woman he loves. Shin Se Kyung will play a travel agent who supports her family. So far we don’t see any supernatural elements. Well, then comes Seo Ji Hye’s character which is that of a boutique owner who has not aged since 200 years. Whoop! That sounds creepy! The show is written by Kim In Young (When A Man Loves, Unkind Women, The Woman Who Still Wants To Marry) and helmed by Han Sang Woo of Unkind Women, Tomorrow Cantabile and Equator Man. Frankly, not too excited about the PD-writer team as I haven’t seen any of their shows. So I’m going to hang my hat on Kim Rae Won’s magic and fantasy premise with this one.

Black Knight is going to be broadcasted on Wednesdays and Thursdays and it plans to premiere in December, following currently airing Mad Dog. The drama recently had its first table read: pics below! 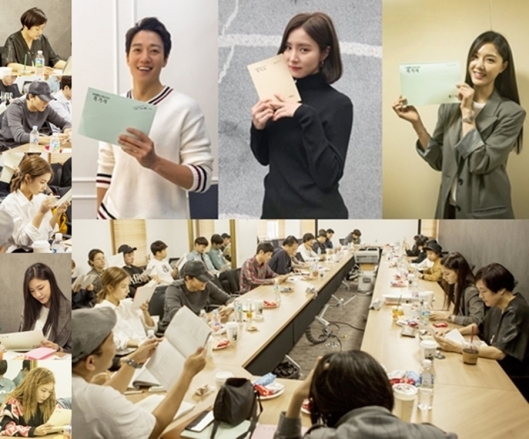