The pair of Lee Sun Kyun and IU seems rather odd but it forms the main lead couple of new tvN drama My Ajusshi. The show is premiering tomorrow in the Wednesday-Thursday slot with a strong behind-the-camera team — it is directed by the PD of amazing dramas like Signal, Misaeng, Sungkyunwan Scandal, to name a few and penned by the writer of Oh Hae Young Again and I Live in Cheongdamdong. The names have surely set the bar high for expectations. My Ajusshi looks similarly moody, indie-like in its treatment and is a story of healing. So I’m not sure if there will be a romantic angle between the two leads.

Three brothers, played by Lee Sun Kyun (middle brother), Park Ho San (Defendant, Smart Prison Living; playing eldest) and Song Sae Byuk (The Servant, The Sound Of A Flower; youngest brother), form the basis of the plot. Along with IU, who plays a cold and ill-tempered girl with lots of burden on her shoulders. Lee Ji Ah (The Woman Who Married Three Times, Me Too, Flower!) plays Lee Sun Kyun’s wife. The set-up definitely sounds unconventional and I’m curious to know how this story will unfold.

Lee Sun Kyun is one of those actors who maintains a great balance between movies and dramas. His last small screen project was My Wife’s Having An Affair This Week. I have really liked IU’s work in some of her shows (Dream High, The Producers) and so I’m looking forward positively to watch her here despite getting bored by her last character that I had seen, which was in sageuk Moon Lovers – Scarlet Heart: Ryeo, before dropping it like a hot potato.

My Ajusshi follows highly acclaimed Mother and plans to have a total of 16 episodes. The drama is also being referred to as My Mister at some places, which is simply a direct translation to English. 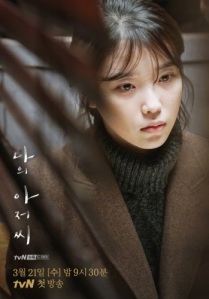 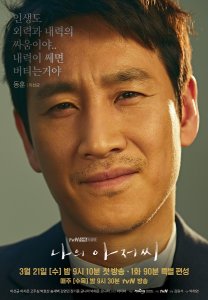