It is refreshing to see Yoon Sang Hyun in a melodrama after really liking him in so many comedy roles (Secret Garden, I Hear Your Voice, Shopping King Louise) though he did do a serious role in thriller Gapdong. He is headlining new romance melo for

MBC titled Let’s Hold Hands And Watch The Sunset. Well, that’s quite a mouthful but totally romantic. Han Hye Jin is cast opposite him who is making a comeback after 2013’s One Warm Word, with only doing a cameo in 2016’s Doctors. The show is about a married couple, where Yoon Sang Hyun plays an architect husband whose wife, played by Han Hye Jin, asks for divorce one day. Truth is, she is faced with terminal illness and thus decides to live for herself after being a selfless wife for so many years. Supporting cast includes Yoo In Young (Mask) as main lead’s first love and Kim Tae Hoon (Nice Guy, Angry Mom, One More Happy Ending, Fantastic) as heroine’s doctor. The latter has undergone huge image transformation in past few dramas after playing mainly negative roles previously.

The first thing that I noticed was how beautiful everyone looks in the posters; the posters being washed in warm hues. The drama looks and sounds moody, mature and romantic. It is anchored by the PD of Radiant Office and writer of melodramas like Cruel Palace: War of Flowers, Flames of Ambition and Queen Insoo. Let’s Hold Hands And Watch The Sunset is hitting the airwaves today as a Wednesday-Thursday drama competing against top rated Return in its last few episodes and second season of Mystery Queen, with My Ajusshi also starting today. 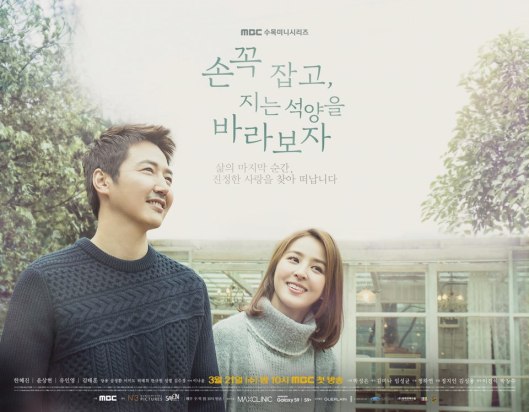 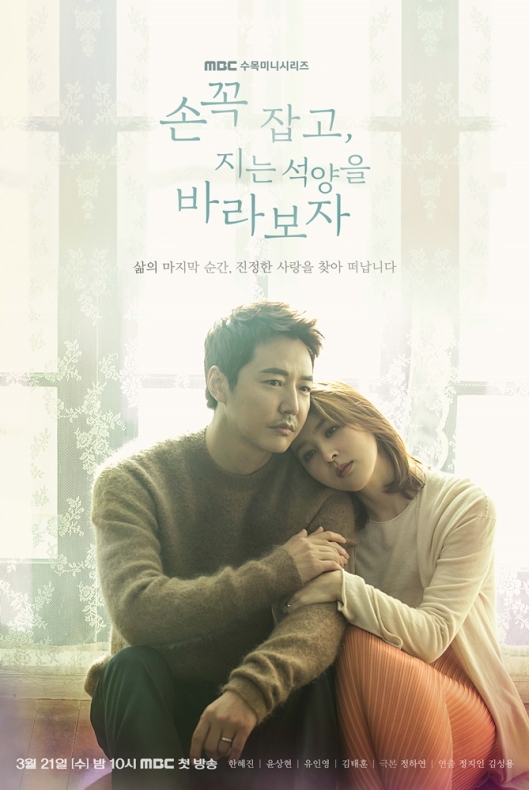