Thirty But Seventeen is such a sweet little show, with a warm heart having an adorable beat. It’s so strange that initially I didn’t even plan on watching this drama but eventually I did and in the end, it has become one of my favorites. Thank God for change of plans!

As the name suggests, the plot of the Korean drama centers around a girl who goes into coma after an accident when she is 17 and wakes up after 13 years, now being a 30-year-old woman. Physically she is old but her brain is still stuck in time when she was 17. Thus begins her journey to come to terms with reality and maturing through life, struggles, relationships and love. Not only the heroine, but all our characters grow and heal as we explore their respective lives. We meet Woo Jin and Chan — the family that lets her stay in their house and Jennifer, their housekeeper. And a very cute dog!

The first thing to notice in Thirty But Seventeen is the fact that almost all characters are kind at heart and believe in goodness. We can see that in plenty of moments, small and big, in this ride. For example, Woo Jin watering a plant or allowing Seo Ri to stay in his house, Yoo Chan bringing a chick home, or helping Seo Ri throughout, Jennifer being so helpful and understanding to everyone, Woo Jin’s considerate boss, Seo Ri playing violin for old grandma — these are just few examples but the drama is filled with such instances. In short, there is a positivity and tenderness from start to finish. And all is topped off with fantastic humor, there are many laugh-out-loud moments as well.

All the characters are in need of healing and they help each other to overcome their past traumas and start anew in life. There are multiple tragedies in the show, but the show is laced with a feel-good factor which never lets the drama become a sad or serious fare. I love that Woo Jin is not the typical cold hero. He is only a bit eccentric, and shows his care and warmth, right from when he was a teenager to the time when he became an adult and finally our heroine’s love interest. He has all the traits of a perfect boyfriend — caring, understanding, supportive and loving. I’m glad that the drama never rushes things with respect to Seo Ri in terms of coming to terms with her age or changed scenario and the path to becoming a mature person. She is such a sweet, warm-hearted and resilient person. I loved their romance — cute as kittens, sweet, both giving space and support to each other and oh-so-fluttery. I also liked their connection right from the beginning when they were teenagers, it was all so heartfelt and romantic. There is no noble idiocy and no grand gestures, a simple but effective journey of love, healing and finding happiness.

Thirty But Seventeen talks about guilt, what-ifs, if-onlys; and we, along with the characters, learn that the only thing we have is the present, past cannot be changed and should be cherished for what it was and what matters are the ones we love and who love us back and that is enough. Also, we should enjoy what we do and that is real success.

Yoo Chan is one of the most adorable characters I’ve ever seen in dramaland. He is such a sweetheart, helping everyone, and taking care of Seo Ri and his uncle Woo Jin, in so many endearing ways. He has this odd but delightful balance of being mature and childlike. Jennifer is a winner! She is a bit weird (but funny) at first but as we move forward, we see so many layers to her nature — warm, motherly, caring. I also loved Chan’s friends and the close family that all of these people form with one another. I was so impressed by Woo Jin’s boss, played pleasantly by Jung Yoo Jin, as she stays away from becoming the usual jealous secondary character, pinning after the hero. She is candid and fully on-board for the romance of our main couple.

This leads to the fact that Wang Ji Won‘s top violinist character Rin Kim is mostly wasted and pales in comparison. She is jealous and insecure of Seo Ri since the childhood days and continues to do so even after witnessing how tragic her life has been. At least, she never turned into a full on negative character. I do think the drama could have given more time to Seo Ri’s childhood friend Hyung Tae, now a doctor. But then it was also important to show it from Seo Ri’s point of view, where she now considers him more or less like a stranger but still feeling sorry for being awkward with him.

The house where our leads live is another character in itself as we see memories, new and old, attached with it. Be it Seo Ri’s secret room, Chan’s room with poster saying “don’t think, feel”, or Woo Jin’s room with the skylight window. 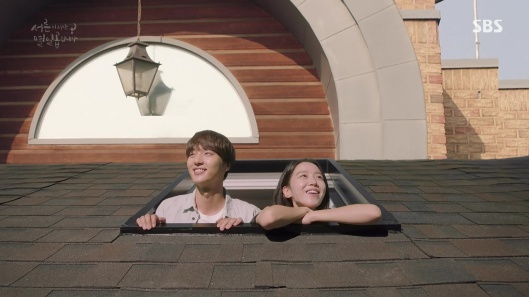 I totally fell in love with Yang Se Jong here. He is simply terrific as a man gradually giving a chance to himself for returning to his old happy self after being in guilt for so long. Shin Hye Sun is winsome as the sweet, kind heroine and never makes her annoying, which can be a case at times when drama heroines become too innocent and overly positive. Both have a lovely chemistry. Ahn Hyo Seop is all heart and Ye Ji Won is amazing as always. A shout out for Park Shi Eun and Yoon Chan Young who perfectly make the teenage lives of our leads so deep and beautiful. The soundtrack is fine with some hummable tunes.

Nothing much happens in the drama if we consider it as a whole. But we fall in love with the people of its world, and want them to receive all the happiness and love. Thirty But Seventeen made me smile constantly and gave me the warmth of a blanket on a cold night.