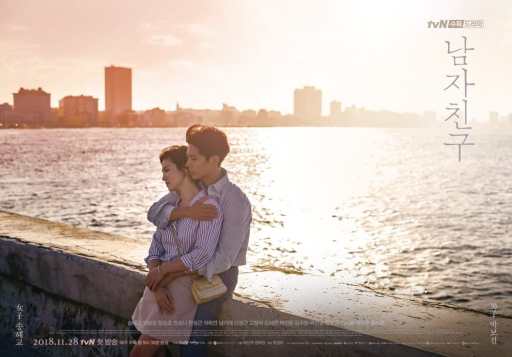 One of the most awaited dramas of 2018, Boyfriend aka Encounter has completed 3 weeks of its run and quite successfully in terms of ratings. As for the review by the viewers, there is a mix impression. Some love it and some found it boring and moved on. As for me, I have mixed feelings about it, to the point that I was ready to drop it after episode 3 but the ending of episode 4 brought me back on the train.

I like the central idea of romance between two people who hail from strikingly different backgrounds, life journeys and thus, have dissimilar personalities. Not to mention the role reversal of male and female leads. Cha Soo Hyun (Song Hye Kyo) is from a political and rich family who has always taken decisions based on others and has never lived life on her own terms. She got married into similar family and later got divorced. Now she is the CEO of a hotel and trying to live an independent life but with complete public scrutiny as she is a famous person. Then there is the hero, Kim Jin Hyuk (Park Bo Gum), on the other side. He is from an economically normal family who lives life to the fullest. He is full of positivity and exuberance.

I liked how they met at a foreign land where she could be herself for some hours and that gives the hero a reason to understand her in a better manner, without any prejudice or inhibition; and also, more than anyone else.

And later when they have the second meeting as CEO and employee, it was quite interesting to see how they will act then. I’m glad they both remained normal and cordial, with lots of respect for each other. And this is one factor I really admire in Boyfriend.

The first episode, as I have seen in many other dramas that feature foreign locations, spends a lot of time in showcasing Cuba. Well, it’s beautiful but somewhat boring as there is a huge chunk when nothing much happens. Finally when the leads meet, it becomes fine.
I love that Soo Hyun is not strictly the serious, no-nonsense type. She has an understated sense of humour and her relationship with her secretary is adorable. Also, her driver, played by Go Chang Suk, is one of my favorite characters from the show. He is so natural and provides much-needed warmth in a show which has many over-the-top negative characters (more on this later).

I’m also liking the interactions between the couple which are full of care, low-key humour, respect and admiration.

I also appreciate the start of their relationship, as friends and also accepting their attraction. Soo Hyun is first time thinking about herself first and not giving a damn about the toxic people around her. I first feared that the leads were falling for each other way too soon and we will get angst for the remaining part. But I’m happy that they are in that pre-relationship phase and also facing the world at the same time and hopefully the remaining show will be about the growth of this bond.

Well, all this sounds well on paper but I’m not too emotionally attached with the pair, together or individually. Despite liking their scenes, they are not exciting enough to click my romantic buttons. I find them just okay. But yes, episode 4’s ending was laudable. It was simply great how our hero comes forward and tries to show how normal they feel about their relationship/ friendship and it is none of anyone else’s business.

This was one part and now comes the second, which almost made me drop the drama after episode 3. The over-the-top, makjang element, inhibited by Soo Hyun’s ex mother-in-law and her own mother. They are just so disgusting in their manners and motivations. The whole angle of Soo Hyun’s marriage, divorce, ex-husband, moms, politics is laced with melodrama and headache inducing tone. The ex-husband is thankfully not the clinging type but he is uninteresting and I’m least interested in the fact that why he divorced her when he is so much in love with her ~yawn~ Then there is the ridiculous divorce contract.

Also, I find myself losing interest whenever hero’s brother and friends’ track is shown. I also think Jin Hyuk’s character is a bit too enthusiastic at everything. It’s like if there is no better dialogue to say, he simply smiles. Well, not complaining for Park Bo Gum’s too many smiles but it stops making sense at some places.

All in all, Boyfriend is currently giving me that on-off feeling. Let’s see finally what happens!