Work has taken up most of my time and energy and hence, the frequency of posts has become so, so less. As a result, I decided to make up for it in this one single post about new dramas that I missed writing about prior to their premieres. In fact, this is the first time since starting the blog that I’m not aware of many new shows that have just started airing!

About: Lee Seo Jin (returning to dramaland after 3 years as 2016’s Marriage Contract was his last drama) plays an elite anchor at a broadcasting station who has a lovely family. He undergoes a tragedy when he is on a family vacation. Sung Dong Il (Answer Me 1997) plays a police detective who investigates the case with Im Hwa Young (Sketch) playing a criminal profiler. Bonus — only 7 episodes!

My Thoughts: Sounds very intriguing. Thrillers are always fun to watch and if their go-to network is OCN then one can expect quality and good dose of thrills, darkness and grittiness. 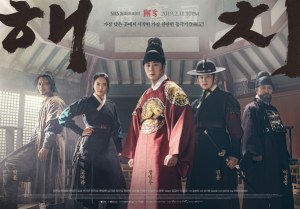 About: With Joseon Dynasty as its backdrop, the drama stars Jung Il Woo (Flower Boy Ramyun Shop) as crown prince Lee Geum (who later became King Yeongjo) who despite having all the qualities, faces discrimination because he has a common woman as his mother. Costars are Go Ah Ra (Miss Hammurabi) as a female police inspector, Kwon Yul (Whisper) as a scholar preparing for civil service exam and Park Hoon (Memories Of The Alhambra) as a court entertainer and a gang leader.

My Thoughts: Well, sageuks are not really my cup of tea except when they are mixed with modern elements. So the show doesn’t interest me much. But in general, it has a lot of attractions — Jung Il Woo is returning after his military duty, plus the writer has previously penned acclaimed historical shows like Dong Yi, Horse Doctor and Yi San.

About: It’s a murder mystery where a priest with anger issues (Kim Nam Gil, Deserving of the Name), a soft-hearted detective (Kim Sung Kyun, Reply 1988) and a fearless prosecutor (Honey Lee, Please Come Back, Mister) join forces to solve the murder of an elderly priest.

My Thoughts: Comedy and crime are two genres that are not usually mixed in Korean dramas, but here we have one! So that’s surely a refreshing factor about the show. The characters sound offbeat and interesting, plus I’m always ready to sign up for a mystery fiction. Need more reasons? It comes from the writer of God’s Quiz and Chief Kim.

The Light in Your Eyes

About: The drama has other titles as well — Dazzling and Radiant. This is a fantasy melodrama starring Han Ji Min (Familiar Wife) as a woman who time travels and becomes an older woman, played by Kim Hye Ja (Dear My Friends), thus gaining ability to control time. Nam Joo Hyuk (Weightlifting Fairy Kim Bok Joo) plays a man who works at multiple part time jobs and lives a reckless life.

My Thoughts: The drama definitely looks pretty, giving a spring like feel. It was not exactly on my plan list but I’m hearing good things about it.  I’m a little wary of fantasy shows after the ending of Memories Of The Alhambra. A plus for this show is JTBC, known for delivering quality content. Also, only 12 episodes. And the writer team has penned Awl, which was critically praised when it aired in 2015.