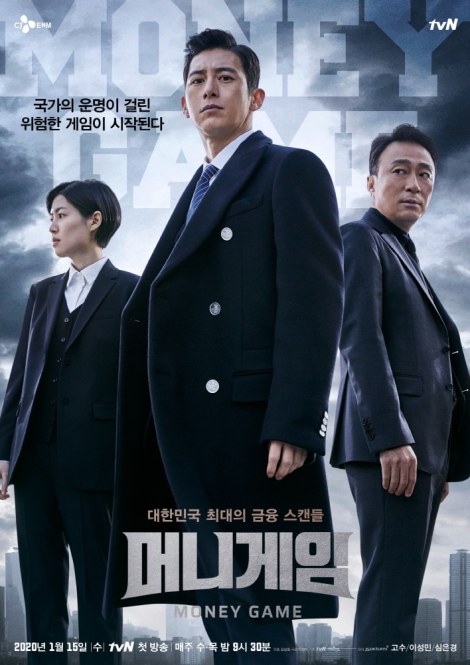 IMF crisis happened in the year 1997, a financial crisis that gripped East and South East Asia. The new tvN drama Money Game is about a group of people at the Financial Services Commission who try to prevent similar situation occurring in 2020. This is because the bank where the government owns large share is about to go bankrupt. The drama boasts amazing talent as Lee Sung Min, Go Soo and Shim Eun Kyung are coming together. Always wonderful Lee Sung Min (Misaeng) plays the chairman of the Financial Services Commission, Go Soo plays the chief in the Economic Policy Bureau and Shim Eun Kyung stars as the new official in the International Finance Bureau of Ministry of Economy and Finance.

This is Shim Eun Kyung’s first drama in 6 years, with her last being music drama Tomorrow Cantabile. She has done a lot of dramas as a child actor but her lead roles have been mostly in movies. One of her most popular films is Miss Granny (2014) for which she won lots of awards. Go Soo was last seen in medical drama Heart Surgeons in 2018.

Money Game seems like a case where I’m excited for the acting lineup but the plot sounds a bit boring (finance has never been my favorite subject!). But maybe it can also be the case where something that seems dull on paper actually transforms into something great on screen. At least I hope that’s the situation here.

The drama is directed by the PD of Arang and the Magistrate and Spring Turns to Spring, and premieres as a Wednesday-Thursday drama starting from today.