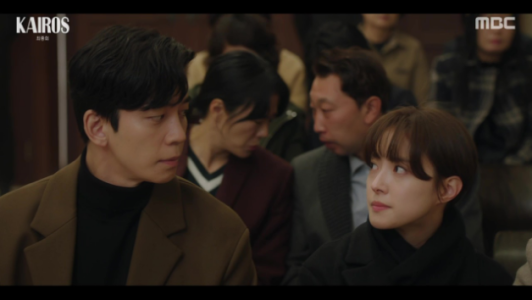 Time is one theme that has always attracted cinema and TV auteurs. But as intriguing as time spin/ time travel sounds, it requires a skilled hand to make it a satisfying experience , devoid of confusions and half-baked treatment. Kairos is that rare TV series which handles its time twisting theme with perfection. Quite simply one of the best thrillers coming out of dramaland.

The show centers around two protagonists and interweaves two mysteries: a man (Shin Sung Rok as Kim Seo Jin) whose daughter is kidnapped and a woman (Lee Se Young as Han Ae Ri) whose mother is missing. They both contact each other through a phone call and help each other to end their ordeals — only they are a month apart in time and can only speak for 1 minute.

Kairos is a fast paced thriller which is more about how and why than being a whodunit. This helps in raising the excitement and interest as we constantly think about how the characters would figure out the mystery and how they will solve the puzzles around them. The show doesn’t waste time in starting the main plot and this quality continues throughout the run — there are no fillers and unnecessary plot angles and characters. I love that the makers believe in the viewer’s intelligence and don’t feel the need to explain everything in neon letters. At the same time, the show is never confusing as to where we are with respect to the timeline. The drama dials up the tension at every turn and it’s a nail biting thriller in every sense of the word.

The 1 minute time window available to the leads to connect with each other provides extra tension in their race against time. It’s great to see normal people as investigators — using their brains, limited resources, determination and desperation to uncover the truth. The drama keeps you on the edge of your seats, providing an oddly satisfying uneasiness about what’s to come. I love that the protagonists not always work in silos. They have friends who help them throughout their difficult path. The 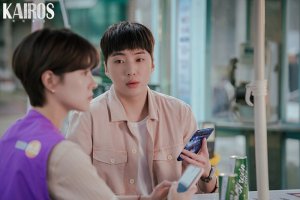 drama becomes all the more awesome when this amateur squad works to save and solve.

Thrills and style aside, Kairos effectively delivers on emotions as well. The core theme of the drama is about the love and care between parents and their children. Be it Kim Seo Jin and Da Bin, Kim Seo Jin and his father, Han Ae Ri and her mom, Han Ae Ri and her father, or Kim Jin Ho and his daughters. Their love drives them to go to any length to protect one another. At the same time, the series doesn’t include any romantic subplots — another proof of departure from the norm.

I love that the drama gives equal weightage to the two main leads. Kim Seo Jin is initially a workaholic person with no time for his family. He is also quite practical and has no space for sentimental decisions. He is a bit ruthless too, partly due to what he went through in the past. But as he comes across the grave situation in his life, we see him grow into someone who cares for others and start seeing what matters the most in life. Shin Sung Rok is perfect in both phases of the character, and brings layers of emotions to his riveting performance — intelligence, hurt, pain, love, courage and care.

Han Ae Ri is just a normal girl trying to earn money to help her mother in her treatment and also trying to make ends meet. But she is full of life and is a compassionate person. Suddenly facing the difficult circumstances, we see her fighting with sheer grit, determination and care. I love that she is a sharp woman who tries to make sense of everything and deals with it with intelligence. Lee Se Young delivers a terrific performance, full of emotions and smartness.

A few minor quibbles I had with Kairos include my annoyance with the character of Ae Ri’s mother who constantly tries to hide the truth from our heroine, making things all the more difficult for everyone. Also, I kept on wondering how the same team of cops handles all types of cases, happening in so many different locations. Furthermore, the main villain seems a bit stereotypical.

Kudos to the show for making us care about most of the characters in the drama. Among the supporting roles, Ahn Bo Hyun as Seo Do Gyoon is brilliant, and is written and played with so many shades. Nam Gyu Ri as Kang Hyun Chae also gives an impressive performance. Shout out to Kang Seung Yoon who plays Ae Ri’s loyal friend.

Another achievement for Kairos is the perfect communication between the two leads. Also, Shin Sung Rok and Lee Se Young have amazing chemistry despite their characters being a month apart!

BOTTOM LINE: Kairos is a kinetic and impassioned adventure packed with heart and smarts.