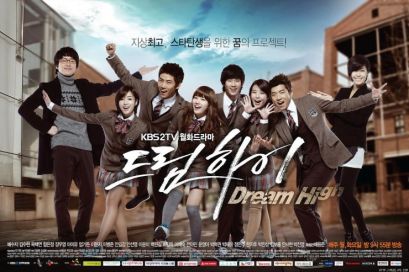 I recently rewatched Dream High and found it equally good as I did during my first time. It is exactly about what the title suggests: chasing your dreams. It is about the victory of an underdog to achieve his dreams. The drama is not a unique one and has got a predictable premise, but when the characters win over your heart and you’re rooting for them to win, that’s all that really matters. Stardom and talent  can be very distinct from each other, and the drama stars all popular idols. But they together make it an endearing watch, even if they are not actors with perfection.

Dream High is a story of six individuals who want to achieve success in the musical field and everyone has a different aim to fulfill. The story then progresses with them as they struggle through the difficulties in their path. They are helped by an idealistic teacher, who guides and inspires them in their journey.

One of the most remarkable things about this drama is that it’s completely feel good and optimistic. It is touted as a romance, comedy, musical show; but for me it is inspirational more than anything else. I liked that the show portrayed each one of our characters as a different person and that nobody had a bed of roses in their lives. At one point or another, they had to face the hard realities or problems. In doing so, the drama covered so many serious issues deftly, that are involved with the entertainment field and showbiz.

I simply loved the poignant and inspiring dialogues in the show, that are very impressive. The heart of any drama lies in its characters and your ability to empathize with them. Here, we see them grow and rise from the bottom. How can you not root for an underdog team of the talented singers who’re laughed at by the whole school, who’re ridiculed by the very association that’s given them admission? How can you not cheer for a man who is slowly loosing his hearing ability, or for the ones who are being blamed even if they are the victims?

Yes, the drama has cliches but they aren’t so much offensive as they are affectionate. Dream High is about music and so we have plenty of dance and musical performances, and they are filmed magnificently. The romance is not that much highlighted here as is the friendship. I loved how the individuals start off at the wrong note but later develop a strong bond with each other.

Dream High has got a bunch of wonderful moments. Like when the group performs Jeannie song for Jin Guk’s friend, or when they do the flash mob dance for publicity, or how a loan shark turns into a good person, the group learning the wave dance under the hilarious teacher, Hye Mi’s expressionless attitude, Baek Hee’s redeeming, the cute lovey-dovey scenes between Jason and Pil Suk, and of course every moment of students with their teacher Kang is awesome. 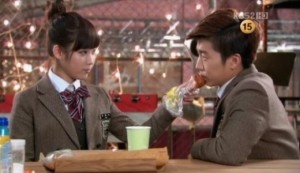 I loved the title track Dream High and felt really good whenever it played on the screen. Rest of the songs are also good, if not totally great.

Eom Ki Joon gives a terrific performance in the role of a determined teacher. It’s a combination of hopeful, hilarious, emotional, strong and vulnerable.

Suzy is in the centre of whole story. Although she doesn’t give a mind blowing acting performance, she is surely believable in her role. Kim Soo Hyun is superb in his role of a talented composer, who comes from the country side and is totally in love with a girl.

Among the idol stars, it’s Ham Eun Jung who does an amazing job and has got a great range as her role shifts through different shades. Taecyeon is promising but he fails to deliver expressions at certain points. IU has done a great job, and Wooyoung is okay in his acting role. But even with the shortcomings, the idols together come off very lovable and endearing. They have a brilliant chemistry with each other.

Lee Yoon Ji gives an earnest performance as a teacher who turns from a strict to an understanding one. JYP and Ahn Kil Kang have given great comic moments.

All in all, a great drama about chasing your dreams, filled with feel-goodness.

'Racket Boys' offers what I already expected from the show written by the writer of 'Prison Playbook' — warmth, adorable and relatable characters, realistic setting, freshness, laughs, affecting narrative.
June seems to be the month of second seasons and webtoon adaptations. So many dramas are coming back with their second installment. To the uninformed, Korean dramas usually don’t have a multi season arc, with the story being told from start to finish in a single season which normally has an episode range from 16 to 20. In recent years, we are seeing more shows with a multiple season trend. Well, if I love a show and its characters, I’m all ready for one more serving!