It looks like ages since I wrote my last post about the most awaited drama of the year or Heirs or Heritors (its official English title) (or The One Trying to Wear the Crown, Withstands the Weight – The Heirs) as most of the casting was completed and now what is left is the shooting, which kick started a few weeks ago and now the team is headed to the US for the filming. It so very looks like Boys Before Flowers with all its grandeur and all. As much as I enjoyed BBF, I don’t want to see part 2. Despite my misgivings on the story about loves and friendships of the über rich school students, I’m actually full of the joys of spring for Heirs as it stars so MANY of my favorite actors. Now, how often is that when I can see all my beloved actors in a single drama– for 16 hours or more than that!! How can I miss this golden chance? I can watch them even if they show nothing but regular class studies of their so-called elite school.

Okay, just to remind ourselves, the cast of Heirs:

As a matter of fact, the show held its script reading in early August but the pictures have just been released and they consist of the whole cast and it’s fun to play the game ‘spot the celebrity’ here. LOL. I’m always a happy camper for movies with lots of stars (namely He’s Just Not That Into You, Love Actually, Valentine’s Day, New Years Eve) even when not all of them are narratively satisfying.

Heirs is written by star writer Kim Eun Sook, whose only drama I’ve seen is Secret Garden, which was totally enjoyable but was quite shallow. The direction is by the PD of dramas like Midas and Tazza. As for the synopsis, I’ve read some tidbits regarding all connections between everyone but I’m staying away from reading it as (1) it’s confusing and (2) it’s kind of spoilery.

Heirs premieres after Master’s Sun finale and that is on October 9. SBS is surely having a great time starting with I Hear Your Voice (which got lots of love as well as ratings), continuing the same tradition with Master’s Sun and hopefully, the follow-up drama will garner the same, judging from the anticipation everyone has regarding it. 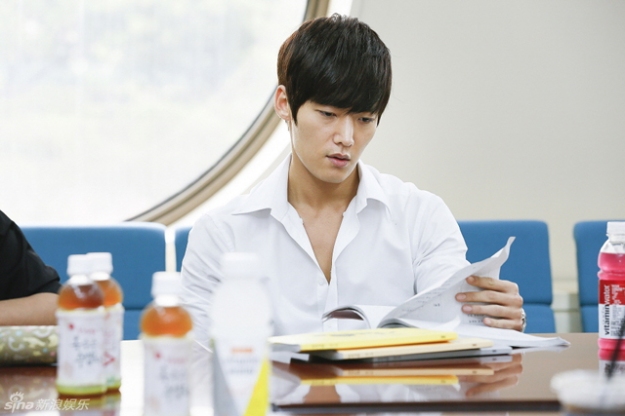 16 thoughts on “Script Reading for ‘Heirs’”