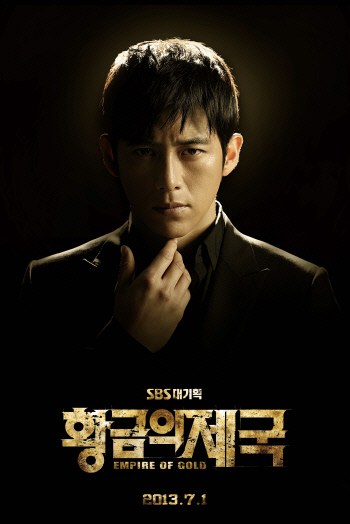 Wow. The new posters are out for upcoming political thriller drama Empire Of Gold, that spans over two decades to tell its story. It has power-packed starcast consisting of Go Soo, Lee Yo Won and Son Hyun Joo in the lead roles, all characters struggling for gain of power of a large chaebol empire. Well, in these kind of shows, mostly there is no one who is whiter than white and the characters are complex. That can be seen from the moody and intense posters, which are truly impactful with brilliant use of light and scarcity of colors, making them all the more stylish.

Now-a-days dramas tend to have more than 16 episodes and that makes it kind of tiring job to keep on watching them for such a long period. Even when the drama is good, there comes a time when we want to start a new one. As the much hyped shows like Gu Family Book and Jang Ok Jung that premiered together finished their run this week, with Mandate Of Heaven also ending tomorrow; a new crop of dramas is coming up and it is refreshing!! I’m not sure if I’m gonna watch Empire Of Gold yet, it depends on the response it gets. My plate is already full of so many shows (new and old). All in all, the upcoming weeks will see many premieres and the new shows have upstaged the older ones and the blogosphere is flooded with their promotional materials including posters, teasers and stills.

Empire Of Gold is directed and written by the team behind 2012 drama The Chaser and there are many common stars as well, which increases the expectations from this one. It will have 24 episode journey and will air on Mondays-Tuesdays on SBS from next week. I haven’t seen any of the leads’ dramas, so that’s one extra attractive factor for me.