Another entertaining episode of Cunning Single Lady is here. We get a clearer picture of the past and Ae Ra’s feelings towards the divorce. With each new episode, I find myself rooting for her more and more, if not completely yet. There can be more in their past than meets the eye and I can’t wait to find that out. The workplace drama comes forward now and to be honest, there are all the stereotypical tropes—hero is the boss, heroine is the employee, mean female colleague/senior, good-natured second lead, but there is still the freshness in our main characters as well as the ex-husband-wife trope which makes things interesting as well as gives a fresh coating to the old formula of a workplace drama. I found this episode really funny and pleasant!

Ae Ra decides to seek revenge from Jung Woo as he acted so rude after all sacrifices she made for him. We see flashback of the day when they divorced and we see Ae Ra crying while hiding her emotions from Jung Woo.

We also find out that it was Ae Ra who earned money while Jung Woo did his research and then she spent three years after separation repaying the debts. There is a funny Temptation Of Wife parody. Ae Ra finally vows to seek revenge by seducing Jung Woo and then slam him down. The only thing she wanted was his sorry that she suffered so much but she didn’t even get that. She starts her first step by joining his company which requires new people without emphasising on education or age.

Ae Ra gives an impressive interview and has some light bickering with Seung Hyun (who has also come for the interview and nobody knows he is the brother of Yeo Jin). She meets Jung Woo there who is shocked to see her and she makes excuse that she has applied in his company to run her livelihood and that this firm doesn’t require special abilities. He later throws her shortlisted resume.

Seung Hyun doesn’t want career as businessman and wants to get himself kicked out, which he plans to do so in his three-month internship period.

Ae Ra is sure that she won’t get the job. But later is surprised that she finally got it.

We then move backward to see that the very same day of interview, Jung Woo saw Ae Ra in that reality show as she was saying that she never wants to meet her ex even in next life. This angers him and he goes back to his office and brings that resume back in the selected file.

Some hyung of Jung Woo sends flowers but it looks like they don’t have friendly terms anymore.

Ae Ra and Seung Hyun join the office and there they get assigned to work under a woman who has a crush on CEO Jung Woo and is not so happy to see Ae Ra (without any reason of course). She gives her all sorts of work to do. Jung Woo tries to show off his supremacy in front of Ae Ra. 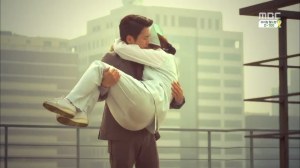 There is some problem regarding work when the firm’s software is in danger—maybe an antivirus threat or information leak. Jung Woo doesn’t want to investigate his employees as he trusts them.

We see an outsider stealing Ae Ra’s ID while passing by.

Ae Ra thanks Jung Woo (they are meeting on opposite terrace to avoid others) and alerts him about others finding about their marital status. He says that it will never come out from him and she should be careful.

At the company’s dinner, everybody gossips about their CEO Jung Woo’s ex-wife that she had an affair and that’s why he gave divorce to her. This makes Ae Ra enraged and she drinks a lot.

Next day, Jung Woo and his team find that information was stolen the previous night and that it was Ae Ra’s entry that was last recorded, with CCTV footage of course being absent for that period of one hour. The team takes her, as she enters the office, with them.

I saw this wrong-accusation-plot on Ae Ra coming from a mile away, when the problem related to security arrived. Anyway, I liked that we found out how Ae Ra reacted on the divorce day, which opens up more possibilities that she didn’t want to part ways but she did take that decision—what compelled her to do so, is the question we arrive at. I’m more and more shifting my side towards her as I can see that she fulfilled her promises of being with Jung Woo throughout their good as well as bad times and I don’t know what happened that was the final nail in the coffin. I loved that now both the leads want to take revenge and we are finally on the basic track of the drama. I loved their interactions today which contain more comedy and lightness than seriousness and the show also seems to take the light, feel-good and funny path and I’m all in for that. As we can see, the leads are more immature and not much thoughtful and I can’t wait to see them melt for each other.

I also like that our second male lead is not the usual always caring and well-meaning guy—he is mischievous and flirty. And Seo Kang Joon reminds me of Ji Sung from Protect The Boss—his looks (especially the hair), the way of speaking and that backpack he carries! I’m least interested in the scenes involving his family (particularly gangster dad). But I think Ae Ra’s family can be funny.

Our love square is still waiting to come to forefront and I’m in no hurry. I’m enjoying the show for what it is and seeing Joo Sang Wook in a comedy is a treat in itself!