Crossdressing is one the most used themes in K-dramas. The dramaland is filled with mostly the following varieties of TV shows: rom-coms, melodrama, family, sageuks and thrillers. Romantic comedy is one of the most loved genres, be it locally or internationally and Korean TV industry makes rom-coms like nobody’s business. And that makes crossdressing a very suitable and sure-shot topic to use as it is accompanied by lots of options to further encapsulate various arcs in the plot: comedy and funny shenanigans, romance, angst, melo. Of course, the setting of a girl dressed as a boy (which is in most of the cases) or vice versa requires a huge suspension of disbelief. Because for all we know, anyone can tell in one glance that they are girls! But I do think that the concept of cross dressing is more apt in K-drama culture than other places because we have seen a fair share of heroes and idols here that we can call pretty. Hence, the believability of cross-dressing. I like that all the shows revolving around cross-dressing manage to be different from each other — be it the reason for doing so, or the revelation of the real gender, or the course through which the girl (or boy) goes in her journey, or the equation between the hero and heroine during the whole cross-dressing shenanigans.

This post is dedicated to all such K-dramas that involve this trope — I have seen some if not all. Let me start with those dramas that I’ve seen: (some spoilers ahead) 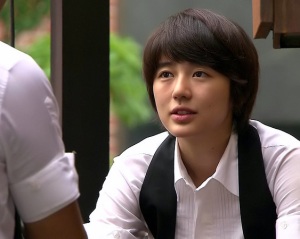 This was my first crossdressing drama and despite the over-the-top central theme, the drama deftly makes this a breezy,sensitive and natural ride with a very indie-like feel to it and its non-stereotypical characters and soundtrack adding a lot to make it a very refreshing watch. Eun Chan (Yoon Eun Hye) is misunderstood as a boy by Han Kyul (Gong Yoo) as she dresses up like one. Things get out of hand as she needs a job and thus continues pretending to be a male. The great thing is that everyone knows that she is a girl except of course our hero and some one or two more guys. Gong Yoo is mind-blowing as a lovable, totally smitten guy-in-love with showing brilliance in the scenes where his character undergoes dilemma and confusion when he thinks that he has started loving a guy. The drama takes a subtle touch to this theme and even the big reveal is handled in a modest manner. Yoon Eun Hye gives one of her best performances. Coffee Prince won many awards and ratings, plus the love from international audience to the same degree. 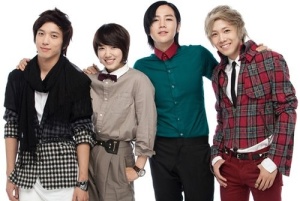 After holding my breath for most of the duration in Coffee Prince, waiting for Gong Yoo to find out that Yoon Eun Hye’s Eun Chan is actually a girl — just imagine my delight when in You’re Beautiful, Jang Geun Suk‘s Hwang Tae Kyung discovers about Park Shin Hye‘s Go Mi Nam being a girl very early on and actually becomes her partner to protect her real identity from others! It was simply another awesome attempt by the Hong Sisters to simply twist the already established plot points. Go Mi Nam (Park Shin Hye) acts as her twin brother and enters as a new member to a famous Kpop band where she meets three hot guys and falls in love with one of them. The drama is simply funny and adorable and one of my all time favorites. It uses the cross dressing theme to bring lots of hilarious situations and has a lot of heart as well.

Not only modern shows, but even some sageuks have taken the girl-dressing-as-boy as their central arc. Sungkyunkwan Scandal is perhaps one of the most popular dramas out there. It stars Park Min Young as an intelligent girl who enters a university as a boy in order to save herself, support her family and also seek knowledge in an environment when girls were not allowed to receive education. The drama is known more for the amazing bromance between Yoo Ah In and Song Joong Ki but it actually has a great mix of comedy and romance with its cross-dressing premise. Yoochun stars as a studious scholar who falls for our heroine, who, he thinks, is a man and undergoes extreme tension and angst as it was the time of orthodox society.

This drama is also a sageuk but has only shades of crossdressing. Suzy stars as a rough and tough heroine who doesn’t act like a guy purposely but the hero (Lee Seung Gi) thinks she is one and finds out the truth a few episodes later. I didn’t complete this drama but this misunderstanding was fun to watch.

And here are those that I have not watched:

Another historical show in which Moon Geun Young plays a talented painter who disguises as a boy in order to find the murderer of her father. The show also chronicles her journey to become a great painter under the guidance of a master painter, played by Park Shin Yang.The drama received very high critical acclaim and also stars Moon Chae Won.

The sageuk is more known for its abysmal ratings and disappointments it left. The central theme is not about crossdressing but Kim Ok Bin spends a major portion of the show, acting as a guy in order to avenge the death of her father. 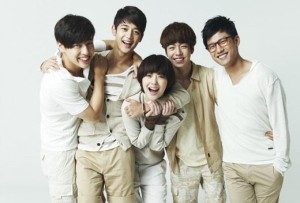 KPop group f(x)’s Sulli stars as the main lead in this Korean remake of massively popular Jdrama Hana Kimi. She plays a girl who enters an all boys school as a boy in order to meet her crush, an athlete (Kpop Group SHINee‘s Minho)

Probably the only drama  as far as I can remember that reverses the scenario as a guy cross dresses as a girl here. It is actually a cute mini series of 3 episodes where a girl who is an aspiring singer enters an arts school and her roommate is none other than a famous CF star who is actually a boy cross-dressed as a pretty girl.

This show came last year when the cross-dressing trend became a bit dated. The plot tells about an internet novel writer who dresses up as a guy in order to get job at a famous nail shop. Stars Park Gyu Ri (of KARA), Song Jae Rim (Age Of Feeling) and Jun Ji Hoo (God Of Study). The plus point is that it has only 10 episodes and lots of eye candy. On the downside, almost everyone complains about how bad this show is!

So what are your favorite cross-dressing dramas and what you like about them? Are there any other shows that I missed out in this list?