I love fantasy dramas and if you blend history and lore and adventure to it, I’m all tickled pink with excitement. But of course, the drama should not be something like Gu Family Book that was all over the place in its plot and characters and not to mention the convenience with which it used its rules of fantasy. *sigh* I think even if a show or movie uses the fantasy theme as its core, a set of rules where your world lives is a sine qua non for it. And well, apart from this, GFB had lots of issues which I already posted at length when I decided to drop it. My love for the possibly good concoction of so many genres into one is the reason why I’m anticipating Records of a Night Watchman, the latest fantasy sageuk that tells the story of the night watchmen squad that patrols after curfew hours and catch ghosts. Jung Il Woo plays Lee Rin, a prince who rejects his wealth and power and lives as a rebel. He has the ability to see ghosts just like his father (Choi Won Young in a special appearance) and in the process where he chases ghosts and spirits, he learns to become a good prince. Yunho plays another night watchman who is a cold-hearted man and speaks less. Go Sung Hee stars as a girl who has supernatural energy and can communicate with nature, Seo Ye Ji is your typical second female lead who is hell-bent on becoming prince’s wife and Kim Sung Oh plays the main villain, a psychic who worships a serpent monster and through it, he wants to be the most powerful man in the world. The drama surely sounds like those fairy tales that include magical creatures and escapades and are extremely fun with dash of romance and emotions.

The plot is enticing but the posters for Records of a Night Watchman are really underwhelming. They scream poorly photoshopped images and low-budget. Especially Kim Sung Oh’s costume and look never fails to make me laugh whenever I see his promotional stills for this show.The only saving grace is the one where Jung Il Woo is surrounded by three ghosts (I think their relationship would be awesome to watch) and reminds me of Arang And The Magistrate‘s posters. Records of a Night Watchman hits the airwaves tomorrow on MBC. 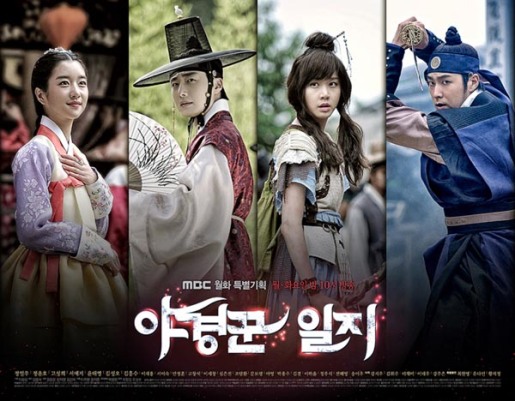