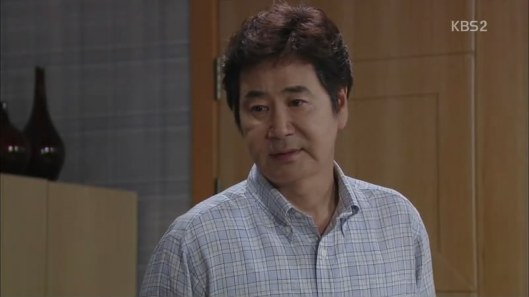 Seo Wool meets the whole family with her claim that Dal Bong promised to marry her. We see in flashbacks that Seo Wool saved him when he accidentally fell into the river. I wonder why he is not explaining everyone that all this happened when both were 14-year-old kids. Somehow he takes her away and says that it was some other person whom she saved and to go away.

Seo Wool is disappointed. Dad finds her sitting on the street and takes her with him to have breakfast. Dal Bong also remembers that past incident, with another little boy (presumably his friend) being the witness of the whole situation. Maybe he feels guilty (she did save his life) and goes out to see Seo Wool, and smiles when he sees her with dad. I think Seo Wool is a very immature person as she came all the way to Seoul after so many years just taking a kid’s promise as her basis. Maybe she just wanted to see whether he remembered her at all.

Dal Bong goes further to take her to station. He sees another salesman of the same product as his, and gets angry. He gets off at some station but forgets his phone on the train. There is this cute scene where some random man makes SW uncomfortable by sitting too close to her but then DB exchanges place with her.

At his office, DB shouts at his sunbae as well as the head and refuses to pay back the money (as per the contract that he forcibly signed). The head brings his goons to force him to pay the sum. SW intervenes and pays the money instead. I love how she tells DB that does he want to bring his father to police station again after getting into a fight. I also like that inspite of being careless, DB cares for his father as he feels guilty that his father had to come to police station on the day of his birthday.

Now SW has saved DB’s life two times and has no money. She asks him to let her stay at his house till he pays back her money. After some persuasion, he agrees. I like that DB does acknowledge (in his mind) that SW did save him. He takes her to some room situated outside their house and tells her to remain quiet till he talks to his father.

Kang Shim and chairman have a very good working relationship. He also takes good care of her, giving a gift for her father as due to him, she couldn’t celebrate the birthday. His son Tae Joo is already irritated with her. When he sees them at a restaurant together and her all smiling at his father, he thinks that something is going on. He asks one of the secretaries close to her to bring her files.

At home, big brother Kang Jae and DB have an argument as hyung thinks that he is a very irresponsible and good for nothing guy. I really feel for dad who constantly tries to make each of his children happy. The way he goes to each of his son’s room to tell them the right thing, I loved that scene. I do think that KJ’s coldness can give competition to all glaciers.

SW is super hungry and sneaks into the kitchen when everyone’s asleep. She is eating her food in the dark when KS enters the house and is shocked to see her. Both the girls scream and everyone comes running towards them.