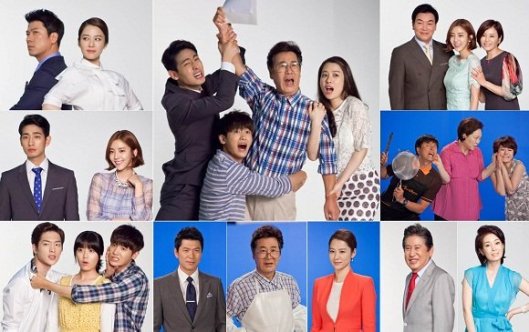 Yay for a nice, heartwarming family drama. If you regularly read my blog (or so I hope!), you might have noticed that I stay away from long weekend shows. It’s surprising that my interest in What’s With This Family came while writing a post about it as that was the first time I researched on it and the whole set-up kind of looked good. So I gave it a try and now I’m happy as clam to report that it’s really good. The characters are well introduced to us right off the bat and there is enough comedy, warmth and camaraderie which made it a nice watch. Also the show is well paced.

I’ve decided to write min-recaps for it. It is to be seen how far I can go with this. Let’s start.

We meet Kang Seo Wool (Nam Ji Hyun) who lives in some country side near Seoul. She met a boy named Cha Dal Bong in her childhood and he promised her then that they would get married at Namsan Tower after 11 years. So here she comes to Seoul with this dream of meeting her first love and getting married.

Cha Soon Bong is a single father who has raised his three children alone as his wife died a long time back. His three children are — Cha Kang Shim (Kim Hyun Joo), Cha Kang Jae (Yoon Park) and Cha Dal Bong (Park Hyung Shik). Kang Shim works as a secretary in a reputed firm and she is a total workaholic and perfect at her job. Her boss is chairman Moon Tae Oh who really likes her and the director is his son Moon Tae Joo (Kim Sang Kyung) who is at loggerheads with her as they both can’t seem to stand each other.

It’s father Soon Bong’s birthday today but none of the kids remember it. They are all very busy from the morning — Kang Shin has some urgent work to do as she rushes off to her office, Kang Jae is a doctor and is in his hospital and it’s first day at work for Dal Bong. Their aunt and father’s sister Cha Soon Geum also lives with them. She doesn’t like the way his children ignore him, being busy with their own life but he doesn’t mind.

Finally Kang Shin remembers that it’s her father’s birthday (as it is also chairman’s birthday and he reminds her that one of her family members also have the same). She makes reservations at a restaurant and tells father about it. He gets really excited like a kid.

Meanwhile, Seo Wool and Dal Bong meet on metro train and start at wrong foot when his pocket gets picked and he thinks that she is involved with the culprit. He finally reaches his office but finds out that it actually has pyramid scheme. This job was recommended by his sunbae and while he is unsure about taking this job, that sunbae makes him sign the contract where he needs to sell certain number of goods before making good money. He is very disappointed.

Kang Jae is the coldest one. He returns home after duty and goes to sleep. Even when Kang Shin texts him about father’s birthday, he remains indifferent. But when an emergency comes, he rushes to the hospital. Kang Shin’s boss gets into an accident and she is stuck in the hospital and the battery of her phone also dies.

Father and aunt keep on waiting.

Dal Bong finally decides to give his job a go and starts selling the items in a park but nobody buys it. Seo Wool wonders why Dal Bong didn’t turn up and returns when she sees him selling the products. Rain starts and his bottles spill out of the bag. She helps him to pick them up but police man comes and takes him with him for selling at a place where it is illegal to sell such items.

When policeman checks his identity, Seo Wool overhears that his name is Cha Dal Bong and she verifies his school and address and is shocked that the smiling little boy has turned into a jerk who fights. Father is called to the police station where he apologizes on behalf of his son.

Back home, Kang Shin shouts at Dal Bong that he didn’t inquire about his job before joining. Finally, dad asks them to be calm and that he’ll prepare ramen for everyone.

Dad tries to lessen his sadness and disappointment by thinking that he will get many more birthdays to celebrate in a way he wants.

Seo Wool remembers how dad was saying sorry and looks determined about something. Next morning, she goes to dad’s shop (of tofu) and introduces herself as the girl who Dal Bong promised to marry.

7 thoughts on “What’s With This Family: Episode 1”