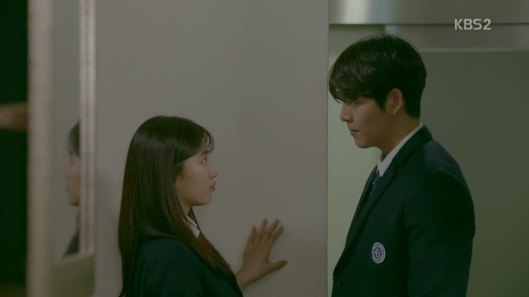 Since the time when Uncontrollably Fond was announced, it looked sure shot that the drama will be as predictable as the movement of hands of a clock. The plot of two people who feel in love as teenagers and reunited as adults after separation sounded totally worn out and uninteresting. Still, I was excited for the fresh and hot cast of Kim Woo Bin and Suzy (well, more because of him) and the second leads Im Joo Hwan and Im Joo Eun. But I was totally surprised and pleased as punch after watching the first two episodes. Yes, there are many melodrama’s favorite tropes but the show managed to pack refreshing elements as well.

For starters, the reunion. Everyone knows about the plot and so it was quite interesting to see the opening episode set in the present time line. We could not guess that the two actually knew each other personally and I really liked how normal their reunion was — without any grand music or gesture. I liked the two main characters — I was actually curious to know what was their history and then how they reached to their present state.

At first I thought that the flashback is over and I was so excited that they never dated — as that increased the possibility of enjoying their romance more as we’ll get to see them falling in love. Alas, it looks like we’ll be getting more back story. I hope not!

The whole vibe of the show is very melo-like — melancholic, moody, serene — laced with pleasant music. There were scenes of humour here and there, but not incongruous.

Of course, we see terminal illness, birth secrets, negative female second lead (just speculating), brooding hero, but I like that so many cards are already out on the table. So now we can move on and see how they are played out going further.

All in all, I liked the show. It’s simple but has fresh execution and one that makes you keep guessing.