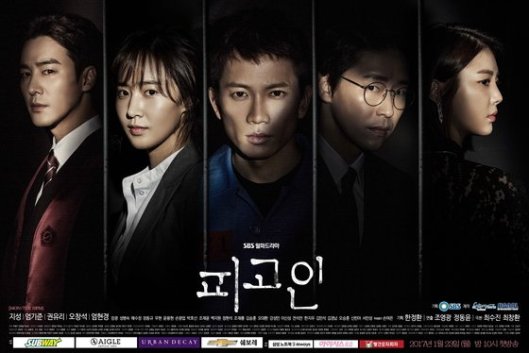 I finally started my first 2017 drama — Defendant. It was definitely a good decision as the drama had solid premiere episodes as it forms the new Monday-Tuesday drama for SBS.

Defendant is a story of a righteous prosecutor Park Jung Woo (Ji Sung) who finds himself locking horns with Cha Min Ho (Eom Ki Joon) when the latter becomes the prime suspect of a murder case. Finding no other way to escape, Min Ho kills his twin brother Sun Ho and takes his identity, telling everyone that it’s Min Ho who has committed suicide. Jung Woo has suspicions regarding this.

Keeping his professional life aside, Jung Woo has a blissful family life with a loving wife and adorable daughter. Four months later, we see him waking up in a prison cell and not having any memory of past 4 months, with his last being that of his daughter’s birthday party. He finds out that he has been accused of his family’s murder. Every time he sleeps, same thing happens, of not remembering anything beyond that night. We also meet public defender Seo Eun Hye (Yuri) who takes up his case in a jiffy without reading what it’s about due to certain circumstances. Then there is wife of Sun Ho, Na Yun Hee, who might play an important role later on.

I liked that the drama moved at a brisk pace, giving us one information after another without making it confusing or too much. The two episodes established our characters well and the backdrop. Jung Woo is a righteous and dogged prosecutor but he is also light-hearted and clever. In that one birthday scene alone, the drama made me care for his family life and it was heartbreaking to see him lose that. Cha Min Ho is our other leading character — he is cruel without any doubt and yet we see that he feels guilty (if only a bit) and deflated on realising his original identity didn’t mean anything to his father. Maybe it’s the character or the actor or both, but our villain doesn’t look one note. We know little about Eun Hye but enough to know that she is trying to get successful and is also a soft-hearted person, with a backstory of her own.

Ji Sung and Eom Ki Joon are fantastic in all their scenes, as was expected. I’m really liking the fellow prisoners for Jung Woo. I think they will become his friends and supporters gradually and will help him in one way or other to solve the riddle of his life. I thought the amnesia would be the normal one but our hero actually forgets everything once he sleeps. This complicates matters (it is something similar to Memento or Bollywood film Ghajini) and I think he will have to use some writing or recording instrument to note down what he discovers each day.

All in all, I really liked Defendant, having the right amount of thrills and drama. Can’t wait for more!