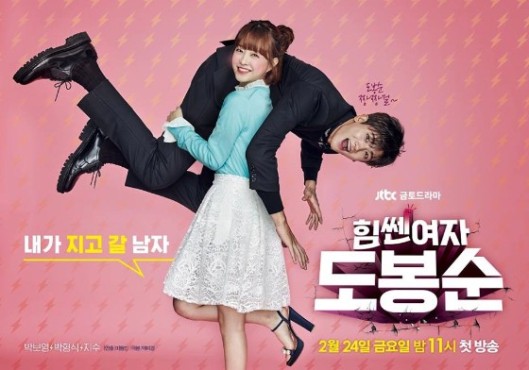 Strong Woman Do Bong Soon premiered two weeks back on JTBC and has hit it out of the ballpark right from its first episode. I recently caught up with first two episodes and my verdict — I like it a lot!

The drama is basically about a girl who looks very small and petite but in reality has Herculean strength which she has inherited from her ancestors, women to be exact.

First things first. Park Bo Young is ADORABLE. She is this bundle of cute…I just want to squish her! She perfectly plays her character. I love that Bong Soon not only has physical strength, but she is a confident girl with lots of sass. She has a huge crush on her friend Gook Doo (Ji Soo), who is a cop. I love how she acts all girly whenever she meets him. Then there is Park Hyung Shik as Min Hyuk, as the eccentric CEO of a game company who hires Bong Soon as his bodyguard after witnessing her strength. I love that he is so cool and weird at times. Thank you for not giving us the same old prickly arrogant boss.

I like the tone of the show — on one side it’s funny, comical and cute. On the other side, it has this serial killer plot running to make things dark and suspenseful. I don’t mind the mixing of these two genres of opposite spectrum, at least for now as both are done with good pace and certain connection. I did get confused about the limitations and rules of Bong Soon’s strength. From what I gather, she can use it for good purpose but if she tries to gain something out of it, she gets cursed. Hopefully, it will become clearer in future episodes.

Overall, I liked the first two episodes, they were vibrant and fun with delightful main leads and good supporting characters.

6 thoughts on “First Impressions for Strong Woman Do Bong Soon”