I’m so ready for a deluge of laughs as the upcoming time slip fantasy drama Manhole looks promising in this regard. The show has continuously released mirthful teasers, stills and posters and has made me excited for the drama unlike my initial indifference when it was first announced.

Manhole stars Jaejoong (his acting comeback after mandatory military service) as a manchild, lazy, irresponsible and unemployed guy who is in love with his neighbour and best friend, played by UEE (Night Light) since forever (28 years to be exact). He couldn’t confess his feelings and now she is getting married in a week. Suddenly one day he falls into a manhole which is actually a portal to travel in time. He has a chance to win her love but which part of past he stumbles upon is uncontrollable. Adding more complications is the fact that his change of history creates a butterfly effect with the future events also changing accordingly. Baro (Answer Me 1994) plays his rival and Jung Hye Sung (who played Park Bo Gum‘s sister and princess in Moonlight Drawn By Clouds) will play the heroine’s competitor. I’m having a feeling that although the two second leads play rival, their antics will be played mostly for laughs rather than creating annoying problems for the main leads.

Manhole premieres today in the Wednesday-Thursday slot for KBS and is follow-up drama to Seven Day Queen, which received praise but was a rating failure. Here is to hoping that Manhole will get decent ratings and will be a joyful, funny ride. The posters are on point with one of them featuring Jaejoong in a bicycle and travelling towards UEE, seemingly at different timelines. The other one has all four actors walking, inspired by the Beatles. Lots of colour and lots of energy! It’s also interesting to note that three out of four leads are singers who later branched out into acting. 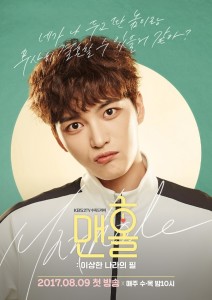