Medical dramas are something that elicit a yawn from me. They all look as if cut from the same cloth and very episodic, not to mention peppered with hospital politics (a must!) that is as annoying as hearing the sound of nails scratching a blackboard. Hence, it’s a good thing that Hospital Ship, the upcoming MBC medical drama, is at least adding something new to the stale genre. The drama tells about a group of doctors who provide medical services and care to remote places where sufficient medical facility is not available, by travelling through a ship. The casting can clearly be divided into two parts — leading lady Ha Ji Won on one side with her powerful performance and repertoire, and rest of the up and coming actors on the other.

Ha Ji Won (Secret Garden, The King 2 Hearts) plays a cold and competent doctor while Kang Min Hyuk (Heirs, Entertainer, from pop band CNBlue) plays her opposite, a warm and compassionate doctor. Lee Seo Won (The Liar And His Lover) plays the doctor of oriental medicine.

I’m liking the sunny, breezy, buoyant posters as well as the individual stills of the cast. The drama can be a warm, upbeat ride with good camaraderie and acting. Its writing credits include Yoon Sun Joo of sageuks Secret Door (2014), Hwang Jin Yi (2006, that starred Ha Ji Won), Dae Wang Sejong (2008) and hit The Immortal Lee Soon Shin (2004, starring Kim Myung Min) fame. I guess this would be her first foray into modern medical drama waters. The PD has helmed shows like legal drama A New Leaf and melodrama I Miss You. Hospital Ship starts its voyage next week from 30 August. It occupies the Wednesday-Thursday slot from Man Who Dies To Live, which was at the top throughout its run. 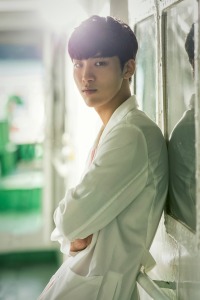