Clean With Passion For Now is the new JTBC drama that premieres tomorrow following remake of a movie, The Beauty Inside and this time also there is a remake though that of a webtoon. The show has an additional character, played by Song Jae Rim, which was not present in the original material. The drama marks Kim Yoo Jung‘s much-awaited return after 2 years and following her winning performance in Moonlight Drawn By Clouds.

Yoon Kyun Sang (Doctors, Rebel: Thief Who Stole The People) stars as a man who suffers from mysophobia which is defined as the fear of contamination and germs. Thus he is obsessed with cleanliness and he is the CEO of a cleaning company. Kim Yoo Jung plays a job seeker who is bright but is not so attentive about cleanliness. Of course, opposites attract and fall in love. Song Jae Rim (Our Gab Soon, Two Weeks) plays a mysterious person who lives on the rooftop of the house where our heroine lives. Since it is sort of a workplace drama, many of the characters form employees. Yoo Sun (Criminal Minds, Our Gab Soon) plays our hero’s efficient secretary, while the Cleaning Fairy workers are played by Hak Jin (Solomon’s Perjury), Cha In Ha (of Kpop group Surprise U; he has acted in shows like Are You Human Too and Greasy Melo) and Kim Min Kyu (I’m Not A Robot).

The drama looks super cute and full of smiles! It is helmed by the PD of Personal Taste and Cruel Palace: War of Flowers. 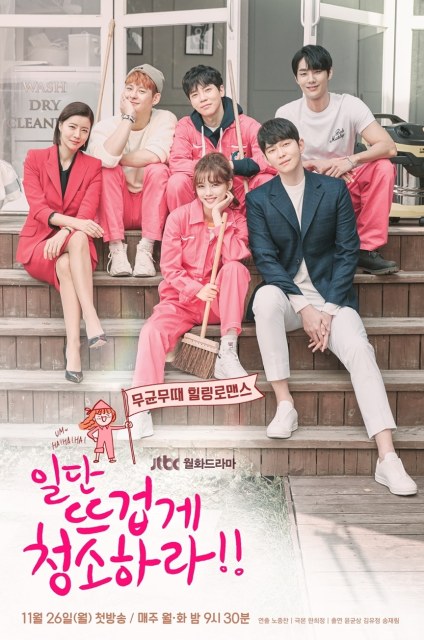