Secret Boutique is the new SBS drama premiering next week and the show definitely looks stylish and intriguing. It stars Kim Sun Ah in the lead role and tells the story about power struggles between women. The actor plays a character who travels the path from being a woman who works at a bathhouse to a woman who is now a distinguished lobbyist. She is the CEO of titular boutique called J Boutique. Kim Jae Young (100 Days My Prince) plays the lawyer at this boutique who has known the heroine since her orphanage days. Go Min Shi (Hundred Million Stars From the Sky) plays an amateur baduk (Go) player who somehow gets involved in this boutique.

The other powerful body in the drama is Dae Oh Group. Kim Tae Hoon (I love that the actor has not typecast himself in similar roles as he plays versatile characters in his projects — example, One More Happy Ending, 20th Century Boy and Girl, Nice Guy, Angry Mom) stars as the son of the family that owns this conglomerate and also the heroine’s love interest. Other actors (and characters) associated with this group are Jang Mi Hee (Shall We Live Together) as the head and Park Hee Bon (Fated to Love You) as the eldest daughter of the aforementioned family.

The posters are gorgeous and full of style, giving a noir feel and it’s refreshing to see that there are still dramas that put hard work into making the posters classy and compelling. I have seen Kim Sun Ah in only My Name is Kim Sam-Soon, her iconic role and drama and of course, she is a fantastic actor. She was last seen in thriller Red Moon Blue Sun (which is on my plan list!).

Secret Boutique is starting from September 18th in the slot of Wednesdays and Thursdays. 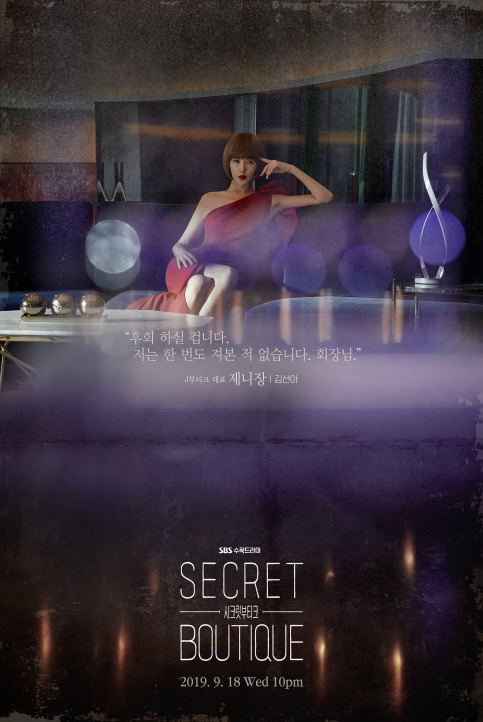