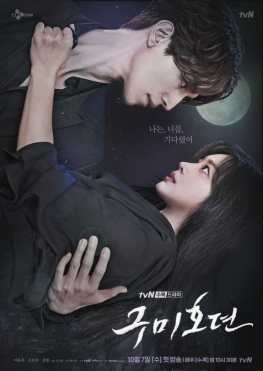 The deluge of dramas in October had left me in a quandary about which one to start and which one to postpone for a later watch. Well, I was intrigued by the premise of Tale Of The Nine Tailed as the fantasy genre with folklore and myths has always piqued my interest, so this drama is the one I decided to go for. After 2 episodes, I can say it was a good choice.

Tale Of The Nine Tailed stars Lee Dong Wook as Lee Yeon, a nine tailed fox who once resided in the mountains but now lives in the world of humans as per a condition that the woman he loved many years ago would be reincarnated. A long time has passed since then (many centuries) but he is yet to meet her. Jo Bo Ah plays Nam Ji Ah, a fearless TV producer who specializes in programs of supernatural themes. Her parents mysteriously disappeared when she was a kid and was saved by Lee Yeon. When she crosses path with him as an adult, she chases him in order to find her parents. Kim Bum plays Lee Yeon’s brother Lee Rang.

I’m enjoying the world of supernatural characters in the show. Apart from the main ones, Lee Yeon and Lee Rang, there are multifarious characters that populate this fantasy world, some good and some bad. The show also has spooky moments, adding to the thrills. I like Lee Yeon and especially because Lee Dong Wook plays the role with deadpan expressions. Also, the hero loves mint-chocolate ice cream! *high five*

The show is laced with comic moments and there is meta humour, with the drama itself hinting to the similarity with Goblin. Even the cringey-ish moments are fun to watch.

It’s difficult to understand Lee Rang much at this stage as he seems very menacing but there was also a hint of vulnerability during his fight with Lee Yeon. Let’s see where we go with this character.

I like the heroine the most who has brains as well as courage. Her work and childhood experience with the paranormal helps in accepting her lack of disbelief when she meets Lee Yeon and other fantasy elements. But that does not mean she is not wavered during these encounters. I’m looking forward to her joining hands with Lee Yeon to find out the truth about her parents. The whole mystery is intriguing and creepy. This is the first time I’m watching Jo Bo Ah in anything and I’m totally enjoying her acting.

Tale Of The Nine Tailed has a super fast pace. I don’t want Ji Ah to be the hero’s long lost love as that would be too predictable. It would be fun if he falls in love with her despite her being someone else.

All in all, a very enjoyable and entrancing premiere!