Yes…Joon-ho has got a haircut and I’m loving it. Not that he wasn’t adorable before, but I prefer this hairdo a lot. As for the episode, now that mom has recovered from the shock and sadness, it’s grandma’s turn to investigate the truth and react to it.

Mi-ryung goes towards Soon-shin and tells her to talk for a moment. But her manager and Yun-ah come there just in time to take her back. Soon-shin is surprised at this behaviour. 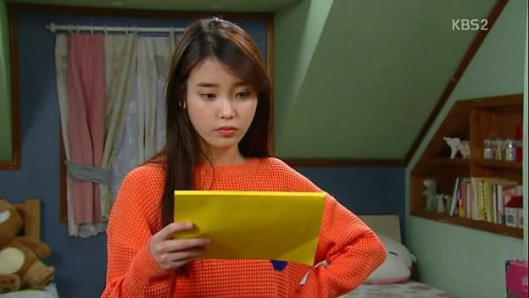 Grandma is disturbed and can’t take it anymore. She asks mom that Kyung-suk is the real mother of Soon-shin, but mom refuses and tells her not to bring that up again.

Yun-ah tells manager Hwang that how can he be so irresponsible to leave Mi-ryung on the street. What will everyone think that she was brought by a girl like Soon-shin. Mi-ryung asks them to leave her alone. She is really sick.

Next morning, it seems like grandma wants to talk in private with mom and so she suggests to go for a walk to the spring with her. But Hye-shin and Soon-shin also tag along.

Joon-ho’s mom is upset that Mi-ryung didn’t apologise after making a mess that night at dinner. AND….we have our hero with a new hair cut!! She calls her and then, Mi-ryung says sorry. But mom is still not happy with her, also because Joon-ho’s dad takes Mi-ryung’s side.

Mi-ryung and Soon-shin and family have an encounter when she goes for a walk and meets them, who went for a walk-cum-picnic. Mi-ryung feels uncomfortable and leaves.

Mi-ryung orders her manager to sell the house as she wants to move from there.

Chan-woo tells Yoo-shin that it’s tiring to hide their relationship from their families and they should tell them about it. She votes against it. Back home, Yoo-shin notices that mom is looking really dejected.

Joon-ho is again busy in watching Soon-shin’s photos. He gets a call from Yun-ah, who tells about Mi-ryung being ill. He comes to meet her, and she asks about the contract with Soon-shin. Yun-ah tells Joon-ho to have a talk with her.

Yun-ah directly asks Joon-ho that does he like Soon-shin and that is why he has changed. He says no and that he made the bet due to his pride. He wanted to prove his ability to her and make her kneel before him. He feels sorry towards Soon-shin and he will take care of the person he has abandoned.

Mom asks Soon-shin that is she still yearning for acting, which she answers in negative.

Jin-wook wants to prepare for university exam and he goes to the book shop, where he meets, who else, Hye-shin. They both chat on their way home and he says that they have never asked each other’s names.

Mom is watching the same interview of Mi-ryung and Yun-ah. Grandma also comes there and again starts saying that she doesn’t need to hide anything from her. Mom stays innocent and this makes grandma more angry.

Grandma goes to Chan-woo’s dad’s shop and asks him about it.

Joon-ho calls mom and requests that she should not make Soon-shin give up acting because of him as she was really happy while studying acting. She should encourage Soon-shin to pursue acting and let her go somewhere else to learn it. (Awww)

Grandma is very angry after knowing about Mi-ryung. She decides to teach her  a lesson, but mom tries to stop her.

Young-hoon tells Soon-shin to continue work in the restaurant till she finds a new job. She refuses saying that it will not help her in moving on and will make her more miserable. He encourages her that she should continue to pursue acting. She seemed to enjoy herself and was full of life during her audition preparation. She should follow her heart. Joon-ho sees them together as they are somewhere out. He is really jealous.

In-sung informs him that the old rumours about Mi-ryung having a daughter have once again surfaced. Manager Hwang tries to convince that reporter but fails.

Grandma takes Mi-ryung’s address from Chan-woo’s dad and goes there. She says that she is still the same shameless person. Her daughter-in-law and family is suffering so much because of her. How can she let other people raise her child.

Mi-ryung answers back that she didn’t beg Chang-hoon to raise her daughter. She didn’t force anyone and how can she randomly come to her house. She says that grandma’s foundation is not that great either. Why is she resenting raising her daughter when she was against her and Chang-hoon back then. She orders her manager to send her out. Grandma finally pours her anger out in the form of pulling Mi-ryung’s hair. Somehow, manager Hwang manages to take her out. Mom finds out that grandma went to Mi-ryung’s house and she goes there. Grandma apologizes on behalf of Chang-hoon.

Mi-ryung is enraged and she decides to get her daughter back.