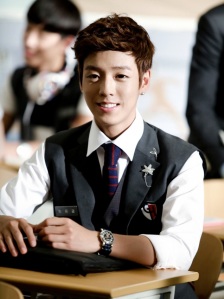 It looks like all the main actors of Heirs are taking a movie as their next project. Lee Min Ho is starring in gangster noir film Gangnam Blues while Park Shin Hye is playing the role of queen in historical The Tailors and now it’s Kim Woo Bin who has confirmed to star in upcoming heist film The Professionals which will also have Lee Hyun Woo who was last seen in Covertly, Grandly. It is actually an ensemble cast (as is the case with all caper films) with Kim Young Chul, Go Chang Suk, Jung Man Shik, Im Joo Hwan and Jo Dal Hwan being the other names included. I love caper films as they are a nice motley of fun, comedy, style, adventure and action. And yes, bromance. The Thieves was another recent K-movie on similar lines but it was more serious than it looked in promos. Actually, this is the case I have observed in lots of K-movies where they look very cute and light and fun but actually give a melodramatic and tragic twist coming as a bolt from the blue for the viewers. Anyway, The Professionals is about a gang of professional thieves who get hired by criminals for their heists. Kim Woo Bin plays a safecracker while Lee Hyun Woo is in the role of a hacker.

Kim Woo Bin had a marvellous 2013 which started with well received drama School 2013 that also gave us his epic bromance with Lee Jong Suk. Then there was his hit film Friends 2 and drama Heirs that escalated his popularity to new heights. He is very charismatic and scene stealer for sure. I don’t know about when we will see him in dramaland but The Professionals will be released later this year as it starts filming in March.