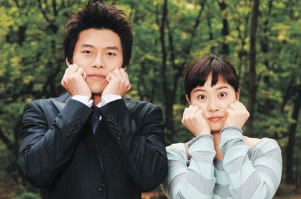 I know I’m pretty late in delivering the second installment of my playlist section but time and work didn’t permit me to delve into it but here is another look at the melodious world of OSTs. My Name Is Kim Sam Soon is one of the highest rated dramas and almost everyone loves it from the bottom of their heart. It is one of those cases where the premise is absolutely clichéd — contract relationship — but the drama is sprinkled with elements that are not clichéd at all. The music is one of those elements and has a very indie feel to it. Without further ado, let me start this listopia with my favorite tracks from the drama:

1. Farewell without Farewell by Ji Sun from Loveholic

This is one of the earliest Korean songs that I recognised and love it just like the way I did for the first time. The song is very soothing and captures that feeling perfectly when you can’t forget the loved one you’re now separated with. The longing and aching for the lost love is echoed beautifully. The song is actually picturised on second female lead Jung Ryu Won — another out of the box thing was to make her a normal and positive character. It was great to see that the people in the drama were not surrounded by any manipulations or plottings but only their emotions, that separated them or united them.

2. Inside My Heart by Kim Jung Eun

This is another great number, a ballad but again fresh as mint. It is our heroine’s song. One of the scenes I remember it being played was when Hyun Bin‘s hero leaves Sam Soon on a road to meet Hee Jin when they are in Jeju Island.

Another lovely song. I especially love the starting music before the actual song starts.

Oh the feels I get on listening to this instrumental. Played several times in the drama and on my playlist, it is a very poignant theme that hits all my emotional buttons.

4 thoughts on “Playlist 2: Gems from ‘My Name Is Kim Sam Soon’ OST”