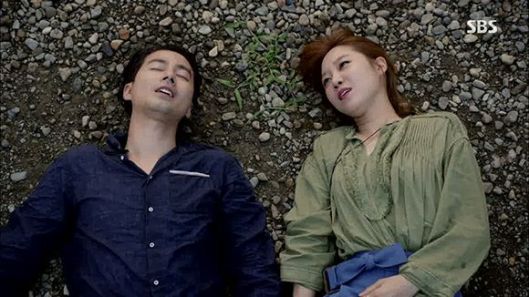 I was never extremely excited for It’s Okay, It’s Love despite my love for Gong Hyo Jin because it was a melodrama and they are usually not my cup of tea. Add time constraints and it became easier for me to skip it than to pick it up and add another dish to my already full plate of drama delicacies. Anyway, viewers have mixed reactions about it so I can’t comment on how good it was. But there is one thing that has made me post about it. Suddenly one day came this song and MV from its soundtrack like a bolt from the blue and now I can’t stop pressing the replay button on my playlist when the number is on. The title for the song is It’s Okay, It’s Love and it’s sung by artist Davichi, which is actually a Kpop ballad duo. The song is very soothing, melodious and I love the way it transitions step by step from this slow, low-key tone to a heavier one. I haven’t seen the drama but the song generates so many emotional feelings — and I feel like I’m standing on a beach and waves are coming and going with wind in the background.

The drama received medium ratings and from what glimpses I’ve seen here and there, this is the first time I’ve seen Gong Hyo Jin with so much skinship and kisses and that too in a very comfortable manner. I wish Master’s Sun showed more of that. *sigh*

Check out the MV below and let me know about your thoughts on the drama as well as the song. I love the breathtaking cinematography of some scenes.