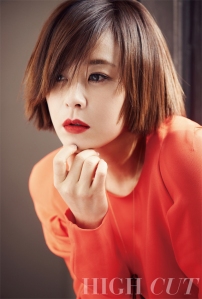 Superhit show Misaeng has still got 8 more episodes to go but its follow-up drama has started gearing up for its premiere in January. The show is Heart To Heart and stars Choi Kang Hee and Chun Jung Myung in lead roles. The premise actually sounds a lot like It’s Okay It’s Love and I think mental issues and love-story-with-the-doctor seems like the new dramaland favourite trope. But I don’t find it particularly interesting. Heart To Heart does sound quirky with a story about a woman who can’t stop blushing and hence, disguises herself as a grandma when she goes out as she remains at home for most of the time due to this sociophobia. Our hero is a psychiatrist who suffers from a trauma due to his older brother’s death. The drama depicts how these two heal each other. Chung Jung Myung was last seen in OCN thriller Reset while Choi Kang Hee is coming back to small screen after 2013’s dud 7th Grade Civil Servant. I liked her a lot in Protect The Boss but she is not an actress I get excited about in general.

Supporting cast is filled in by Lee Jae Yoon (Heartless City) who plays a detective of violent crimes unit with a one-sided crush on our heroine and Ahn So Hee (former member of Kpop group Wonder Girls) as hero’s younger sister.

Heart To Heart can be a refreshing take as the PD directed Coffee Prince which was warm, breezy and different in execution. And the network is tvN, so I’m hoping for a quality result. Heart To Heart held first script reading a few days back and it is starting from January 2.