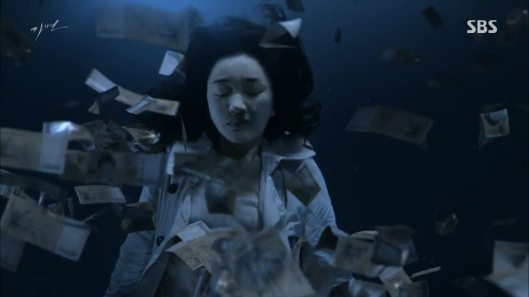 Oooh, I like it! Episode 2 sealed the deal for me to get on board this crazy makjang train called Mask. We get answers to many questions but new mysteries are also established. Finally the whole premise is set and now our story can start with full force from next week.

Suk Hoon jumps into pool to save Eun Ha. Min Woo doesn’t remember what happened that led to this situation. We get flashes of his memory where we see his mom’s body floating on a lake while a kid (Min Woo) is crying, clutching a necklace.

Meanwhile Ji Sook is trying to call Min Woo but obviously he doesn’t pick up. She also sends a series of messages to him, talking about ‘that night’.

Doctors report that Eun Ha is in coma. Suk Hoon warns the doctor to not let this information go out of the room. Hm.

The family sits down to see the cctv footage of the pool but as we reach that crucial moment when Eun Ha is about to fall down into the pool, the tape goes blank. Security guard says that only Min Woo went into the security room that day. Min Woo believes that he didn’t do anything wrong that day and decides to find out the truth.

It’s informed to everyone that Eun Ha is in hospital. Also, her father is coming back to Seoul that same night. 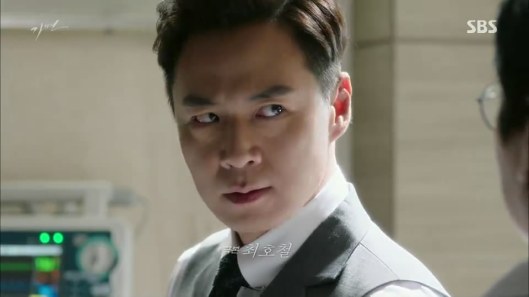 Suk Hoon remembers his last meeting with Eun Ha at some restaurant. It’s clear that they have a relationship as she says that after marriage, she would go crazy as she would have to see him in that house everyday. She tells him about meeting her doppelgänger. Oh so Ji Sook works in SG group’s departmental store.

In the present, Suk Hoon orders his man to look for Ji Sook in the departmental store. They find her.

Min Woo calls back Ji Sook and thinks that she is some reporter who may want money. Maybe she has something to do with that CCTV too. He decides to meet her in the same mall where she works.

Suk Hoon is shocked to see Ji Sook. He orders his secretary to see where she goes and who she meets. 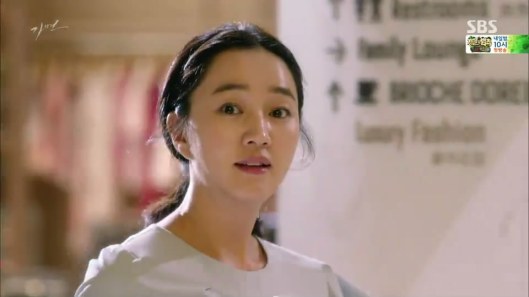 Ji Sook’s family is threatened by the loan shark and his goons vandalize their home/restaurant. Suk Hoon’s men are keeping an eye on it and we see him studying Ji Sook’s resume.

We also meet Min Woo’s secretary Chang Soo (played by Jo Yoon Woo, who was adorable as Ah-rang in Dating Agency Cyrano) in this episode

Min Woo comes to the mall but Suk Hoon’s secretary sees him and reports. Things fall into picture for Suk Hoon as he remembers the bundle of money servants found in Min Woo’s robe. He rushes to the store and tells his assistant to not let them meet.

Min Woo sees a lady wearing the same necklace and he goes after her, calling her mom. He follows her in a car, while Ji Sook follows him. And then Suk Hoon follows her. LOL.

Min Woo gets into an accident as he realises that he imagined all this because the driver is a man, he also feels as if the drink he gets everyday at home is tempered with. JI Sook takes him to the hospital but he can’t see her as he’s unconscious. We again see him remembering that night from his childhood when he and his mom were running from some men and she fell into the lake. 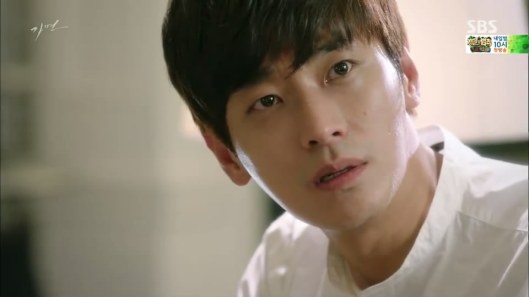 Suk Hoon meets Ji Sook in the hospital and gives her the same bundle of money she needs. He also makes an offer — to pose as Eun Ha (who, he tells her, is soon going to die as a result of an accident) and marry SG group’s heir Min Woo. She refuses because she knows too well how dangerous this could be for her. He reminds her that she needs money.

On reaching home, Ji Sook sees her family’s condition. She takes the money to that loan shark, who demands for more. There she witnesses him killing another man. So he takes her and the body with him. They are in a car and he thinks about what his next action should be. When he sees that the man is still alive, he plans to kill him. When he and his men are out, Ji Sook jumps to the driving seat and drives away. We also see that Suk Hoon is following them.

One of his goons manages to get into the car and we circle back to that first scene of the drama. Finally, the car falls into the river. But Suk Hoon comes in time to save Ji Sook.

Min Woo has a hypnosis session with his doctor (he looks creepy) to puzzle out what happened that day on the pool side. While in hypnotic condition, he sees himself choking Eun Ha. He is shocked and doesn’t tell the doc about it. He is determined that this could not have happened and decides to ask Eun Ha about it.

In the hospital, he goes to her room and we see Eun Ha on her bed. Slowly, she opens her eyes. 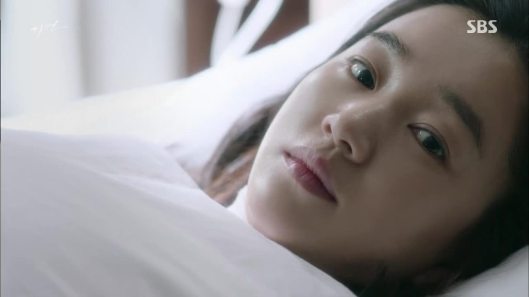 Of course, she is Ji Sook. I really enjoyed Ep 2 of Mask. This world is crazy and full of evil people, doing over-the-top things but I think it’s fun to watch something of this type once in a while. Mask is stylish, fast paced and structured in an interesting way so that interest never leaves the viewer. When you have a story that’s done n number of times, it’s really important to keep the hook and I think Mask is successful in keeping us engaged about what is going to happen next. I wondered initially how the story will reach to the point where Ji Sook will be dying as she is the one who is going to replace the rich woman. It was a well done opening. I also liked to find out that Min Woo wants to be good and normal but someone is purposefully trying to disturb his mental state. It’s great that he has become suspicious too. His step mom looks totally weird to me — I wonder what her intentions are. All her dialogues are full of mystery but I don’t think she means good. His whole family is one big bundle of crazy and cold people. I’m really looking forward to the moment when he finally has Ji Sook in his life because I’m sure she will bring happiness and peace. I also think that maybe Chang Soo, Min Woo’s secretary, is another good guy who thinks positive for him.

I love that Ji Sook, despite having all clichéd tropes in her character and arc (poor, hard-working, loan shark, self-respect), we see that she is quite practical as well as courageous, with quick thinking (both the times when she deals with loan shark and his goons and also when she runs from Suk hoon’s secretary). But she has a very soft side to her (the way she wants to treat Min Woo even if she thinks he took her money or when she talks to him in hospital).

From what I get about Eun Ha, she was a cold woman who was in love with a married man. But did Suk Hoon loved her? Maybe she’ll wake up later in some episode to give new dramatic turns to the story. For now, I’m excited for where we go from here.

I have to say that Mask makes me laugh many times as I was watching all the craziness getting unfold in front of me or when the drama pops up another hackneyed trope.

The icing on the cake is the cast who is doing a great job in making this drama fun.