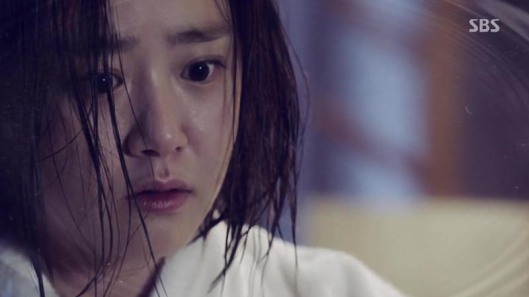 It was an uphill task to finally start Village: Secret of Achiara, the new SBS drama, as the English subtitles were not available readily. Thankfully, the show is not getting subbed and I managed to watch first two episodes. I’m finding it very interesting and something very different from what we usually see in dramaland. It has mystery, eerie atmosphere and secrets.

Spoilers for Episodes 1 and 2

Let me first say that the drama looks like it’s trying too hard to make itself very thrilling and scary — the over usage of dramatic music at the end of each scene is the main reason and too much focus on showing mysterious expressions on almost each and every character, so that they are our possible suspects. I would really suggest Village to tone it down. Now that I’ve addressed my main issue, I can talk about everything I like.

The plot takes place in Achiara, a peaceful village. Our heroine So Yoon (Moon Geun Young) comes there as a new English teacher in search of some answers. I really found it intriguing and creepy that we start with the dead body of her grandmother — I wonder if that was an accident or a murder? Then as soon as she arrives, we see that a serial killer is lurking in the surrounding areas. Later, she discovers a skeleton.

There is also another story related to the village’s richest person, Seo Chang Kwon, who has a second wife in the form of Ji Sook (Shin Eun Kyung) and a daughter from this second marriage. He had an extra marital affair with an arts teacher Hye Jin, and that led to a fight between Hye Jin and Ji Sook. Later, Hye Jin (Jang Hee Jin) disappears but no one notices. All this happened in 2013 and I think the drama did a good job in establishing the time lines of all the events, till we finally reach to the present, 2015. We also meet Ji Sook’s step-son  Ki Hyun (Ohn Joo Wan) and it’s a pleasant thing to see they have a good relation (so rare).

The village becomes active as the discovery of a dead body becomes talk of the town. We meet Woo Jae (Yook Sung Jae), a young (and possibly newbie) cop who is excited that finally he will work on a case. But the higher-ups are trying to sweep this case under the rug as it would affect Chang Kwon’s chances of involving himself in politics.

I find Woo Jae’s constant efforts to find some clue behind everything really cute and earnest. But why it became so easy to dispose off the theory of the murder linked with the serial killer, is something I couldn’t understand. They are trying to show it as his fancy imaginations but that should be the first thing on every cop’s mind. Anyway, I can’t wait for him to team up with So Yoon and make his own investigation team.

So Yoon’s role has been mostly to react on her surroundings till now. Well, that’s understandable as she is facing one drastic situation after another. The whole revelation about Hye Jin being the person that resided in her house was not that big of a surprise, though I admit that I didn’t think of her being her sister.

There are many characters in the show to suspect and everyone looks shady and with secret of their own. I’m really intrigued by the importance of Yoo Na in the story (her friendship with Ba Woo and Ba Woo himself reminded me of God’s Gift – 14 Days, where similar two kids played a crucial role in the whole mystery). I didn’t expect Village  to also include a supernatural bent but I also wonder if it’s true or just a kid’s over imagination.

Village: Secret of Achiara  has lots of thrilling moments, interesting story and characters and scary moments to make it a good thriller. It only requires to tone down its effort to be too thrilling (I do like the background theme though — it’s so suspenseful). The continuous raining also adds to make the atmosphere chilling.The main struggle would be to continue viewer’s engagement throughout its run.

4 thoughts on “First Impressions for ‘Village: Secret of Achiara’: Interesting”