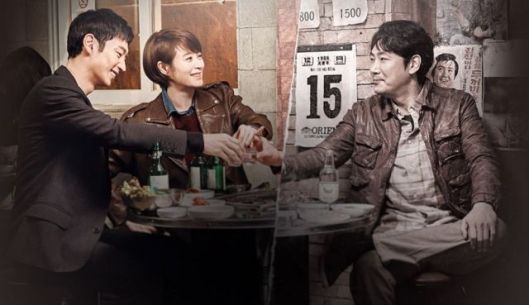 Signal is that rare gem in kdrama landscape which combines difficult elements of thrills and heart together. Enriched with great acting and characters, it is easily one of the best dramas I’ve seen.

Signal has a time twister plot at its core — two detectives, present in two time lines, communicate with each other via a walkie talkie and solve various cases together. We also meet a female detective who is present in both periods. All the while we see how all three of them are connected and witness their lives as they go through different phases of it.

The story is excellently written for Signal, and there are no loose ends anywhere. It’s amazing how the writer has tied everything together, with clearly thinking out the complete story — where it starts and how it ends. The show has a true nail-biting tension with many thrilling and chilling moments, and an intelligent brain instead of something half-baked that we usually see in typical kdrama thrillers. Each and every case is given depth and time to flourish and hence, there is never that episodic feel anywhere. It also helps that the cases bind our protagonists and introduces us to something new about them. The past and present timelines are clearly defined using a different filter/screen frame for each. 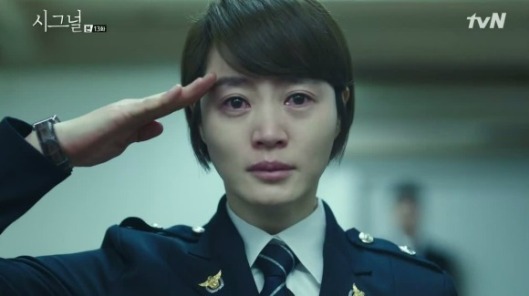 The characters are great. Park Hae Young (Lee Je Hoon) is our present day detective. He is young and gets very emotional at times, which then starts driving his actions. Lee Jae Han (Jo Jin Woong)is the past detective who is absolutely righteous, dogged, earnest and the common characteristics that both have is the big heart and their determination to achieve justice. Then we have our female detective Cha Soo Hyun (Kim Hye Soo) — the only main character who is present in both worlds. We see how much she has grown as a detective and person and what all qualities still remain. There are supporting players like Ahn Chi Soo who is an enigmatic character as he remains in that grey region without being completely black or white and Kim Bum Joo as pure evil.

The show gives us thrills and chills but it also succeeds excellently in bringing tears to our eyes. And there is a lovely bromance even when the two characters haven’t met each other and have talked only through a walkie talkie! The drama provides no easy path to travel in terms of solving the mysteries or predict what’s next and is an exercise for our brains. The ending needs some time to understand it completely (I really had to read/ask/watch to keep everything straight in my mind…phew) and can get confusing. Also, there is no real explanation regarding the signals transferred between the two heroes, except the philosophical one.

Acting is top-notch in Signal, which was totally expected. Lee Je Hoon is great in his role but I think he did overact in few moments which made it more dramatic than natural. Kim Hye Soo shines as she is perfect in being a naive rookie as well as the experienced, deft cop. But it’s Jo Jin Woong who provides the heart and soul to Signal — he is simply marvellous! The supporting cast is also first-rate. The soundtrack is powerful and adds to the vibe of the show.