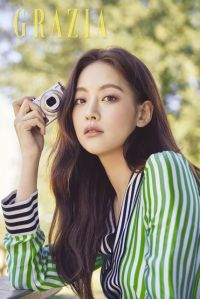 Well, well, the upcoming fantasy drama by the Hong Sisters (their filmography list contains most of my all time favourite dramas: Delightful Girl Choon Hyang, You’re Beautiful, Best Love to name a few) titled Hwayugi has finally lined up its confirmed cast and it has definitely curated a multitudinous array of actors to infuse life into its many characters. The show will be aired on cable network tvN and is based on classic Chinese novel Journey To The West. It will take place in the modern world and convert the characters accordingly. The post will be a longer one, let’s get started.

The source novel is a story of a monk who travels to the west along with four companions in order to obtain sacred texts. Hwayugi is a modern retelling and Oh Yeon Seo (My Sassy Girl) stars as the central monk character, in this drama, as a real estate CEO who is deft in selling houses with bad luck (for example, a haunted house). Lee Seung Gi plays a mischievous minor god, whose powers are sealed up and he is sent to earth. He just sits idly when one day he finds out that Oh Yeon Seo’s character can unlock his powers. These two start their path with a bickering relationship and of course, fall in love along the way. Cha Seung Won plays the CEO of an entertainment company who is charismatic and forms love triangle with the above two leads (not really a fan of this love triangle. I would prefer two love story lines instead!). FT Island‘s Lee Hong Ki stars as a top star, forming the third companion. Then there is the fourth and last one, played by Jang Kwang (Defendant, Moonlight Drawn By Clouds) who is a wealthy real estate businessman.

The other cast members include terrific Lee El (Black, Liar Game) as Cha Seung Won’s secretary and follower, Lee Se Young (I’m finding her really cute in The Best Hit, which I’m currently watching) as an idol trainee, pop group Sistar‘s Bora as a top star, rapper ONE as a mysterious person, Song Jong Ho (Answer Me 1997, Jackpot) as a politician, and Kim Ji Soo (Hwarang) as Cha Seung Won’s first love. Kim Sung Oh (Secret Garden, Fight My Way; he is always great in all his roles) plays a real estate employee.

I really hope that Hwayugi weaves all these characters efficiently in its tale and not become a hot mess instead. I have always loved Hong Sisters dramas and many of them are responsible for my love for Kdramas. But lately their shows have been disappointing (Big and Warm And Cozy) and Master’s Sun was a bright spot in between the two. I really want Hwayugi to be super awesome and I’m already excited for its mythical premise. The cast is another factor to get excited about. And the reunions! Three of the main leads have worked with the writers before and all in great roles and TV series (Lee Hong Ki in You’re Beautiful, Cha Seung Won in Best Love, Lee Seung Gi in My Girlfriend Is A Gumiho).

Hwayugi is helmed by the PD of Warm And Cosy, The Greatest Love, Queen Seon Deok  and plans to premiere in December. Fingers and toes crossed that it will be good!

4 thoughts on “The confirmed cast of Hong Sisters’ ‘Hwayugi’”