Finally the time has arrived for the premiere of the last most-awaited drama of 2017 — Hwayugi (or A Korean Odyssey) — consisting of popular writer duo, the Hong Sisters as well as a super hot star cast of Lee Seung Gi, Cha Seung Won, Oh Yeon Seo, Lee Hong Ki, Lee Il, Jang kwang, Lee Se Young, Song Jong Ho, Bora, ONE and Kim Sung Ho. Be it the writing by screenwriters who have given us many funny-romantic shows in the past, or the reunion galore here, or the classic novel Journey To The West on which Hwayugi is based on, or the intriguing fantasy world of the plot, or the stars themselves, or the first Lee Seung Gi project after his mandatory military service — there are multiple reasons to get excited for the show. The posters are hilarious as we see the four main leads holding photo of the characters from the novel they play in the modern adaptation — Oh Yeon Seo is the monk character, Lee Seung Gi plays the monkey demon, Cha Seung Won (I love his look!) plays the Bull Demon King and Lee Hong Ki plays the pig demon.

Hwayugi will air on Saturdays and Sundays in the weekend slot of tvN and premieres tomorrow on the 23rd of December. It is helmed by the PD of Warm And Cozy and Best Love. Hopefully it will be as good as it sounds and will not be a shemozzle! 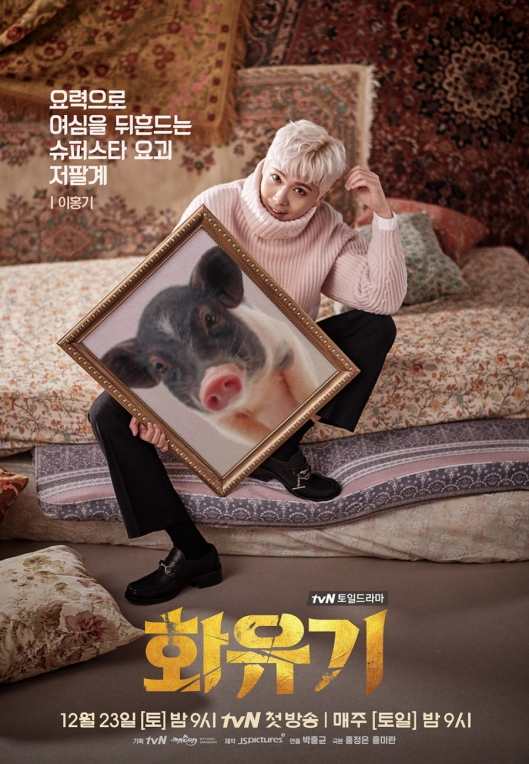 5 thoughts on “‘Hwayugi’ is all set to premiere tomorrow”