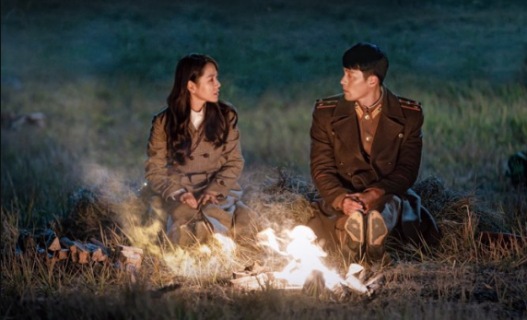 Crash Landing On You has to be one of the most anticipated dramas of 2019. It boasts a star cast consisting of popular actors of the movie as well as TV industry, Hyun Bin and Son Ye Jin. That alone is enough to make one interested in the show, but add to that the writer of superhit You From Another Star, it is surely a recipe for a much-awaited drama. The show has premiered on tvN but it is also available on Netflix.

The story introduces us to a rich heiress Yoon Se Ri (Son Ye Jin) who accidentally lands in North Korea after a paragliding accident. Ri Jung Hyuk (Hyun Bin) is a North Korean soldier who helps her in hiding and arranging for her safe return to the South. We also meet main villain Jo Chul Kang (Oh Man Suk) who is head of the border area force, and also a swindler Koo Seung Joon (Kim Jung Hyun) who is on the run from South Korea as he cheated and took money from a rich man.

Crash Landing On You has an unmistakable feel of a classic movie where a macho man with a good heart meets a pretty woman and they fall in love, but what I welcome is the fact that the heroine is not a damsel in distress — she is gutsy, determined, brave and instinctive. The hero is also a caring man, just annoyed by the knowingly or inadvertent trying-to-be-funny antics of the heroine. I was invested in their light banters and the moments painted with romantic colours. I also love that the setting is unusual, a village in the North, which adds some bit of freshness to the plot. Hyun Bin is as always winning but I do think that Son Ye Jin can tone down the acting a bit, as it is on the border of too much and cute. She looks gorgeous as always. The production quality is high, with beautiful and clear cinematography and sets. I also like the group of soldiers helping out the heroine and their interactions.

Now, things that I got annoyed with. Se Ri’s family! So, so cringey and cheesy-ly makjang, with no one having a heart, with one note motive of getting the inheritance. And the show also requires a lot of suspension of disbelief if we think about how Se Ri is managing without getting caught. Well, almost (no spoilers here!). Then the villains. They are so stereotypical, it makes me laugh. The tracks involving the village people are also akin to watching paint dry.

All in all, I’m liking the main pair and their track so far (which might be leading to fake relationship trope (Say what?)) and I really hope the drama shows more of them and less of anything else. And I mean less as in only 1 scene per episode.