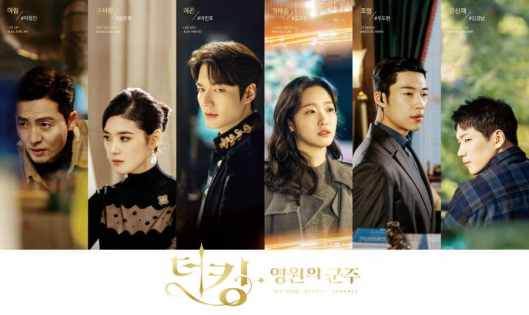 The King: Eternal Monarch, the highly anticipated drama with top writer Kim Eun Sook at the helm and hot stars like Lee Min Ho, Kim Go Eun and Woo Do Hwan, has finally premiered and has aired 4 episodes, and is well in its third week. It’s airing on SBS as well as Netflix on Fridays and Saturdays. I have mixed feelings about it, with more issues than praise.

The premise of parallel worlds is surely interesting, along with the dopplegangers. It makes for a fun watch. I do think there is too much information crammed in first 2 weeks but I like the placement of characters and their interconnection. I wish we were given more answers about certain things. I’m excited to see further story after where episode 4 left us.

The show is beautiful to look at, like a painting. The shots of nature as well as characters are gorgeous.

Cast is so pretty!

Well, when you have so many good looking people populating your screen, it’s natural that you get a bit shallow. Lee Min Ho is so handsome, Woo Do Hwan is hot as the bodyguard and funny as the cop assistant (I’m not exactly sure what he is in the other world), Jung Eun Chae looks so sophisticated and gorgeous, Kim Go Eun looks pretty and Kim Kyung Nam is cute and a new find for me. Lee Jung Jin is enigmatic.

I think the overall acting is pretty average in the show but Kim Kyung Nam is amazing as the cop who secretly loves the heroine and who has a tensed family life. He gives the character gravitas. His flashback scenes when he first met the heroine were so sweet. And him with that ice cream? ~hearts~

I don’t know if it’s intentional but we are not given all the answers for certain things. Rules of the parallel worlds or the magical flute are not properly explained, there are random scenes of a kid with a yoyo ball, then there is random connection between Woo Do Hwan’s two characters where they feel each other’s physical surroundings (which is not seen in any other character!). It feels as if the show wants to bring in all the fantasy elements under the sun. I do get when the drama tries to open its layers one by one but here I find myself desperately in need of some explanation in a lot of scenes. Also, we are shown that both the worlds are modern but then how the king has amused looks over certain things while he is in Republic Of Korea? Sometimes it becomes difficult to differentiate one world from another, which leads to lots of confusion.

The scenes are not very interesting and funny. In fact, I keep getting distracted while watching the show as nothing is gripping. Humour is dull and it doesn’t help that we get boring situations like cases being solved as the heroine is a cop (feels as if to fill up the space), certain side characters whose story is akin to watching paint dry (like that whole gambling bit or the Prime Minister). Certain characters appear randomly, like those goons out of nowhere! These are just few examples but the drama feels dull and boring in most of the scenes. It doesn’t help that the episode length is more than 1 hour which leads to slow pace, and too many scenes with too many characters.

The King knows everything!

So basically the hero, or the king in this case, is like this super entity who never gets surprised over anything and he knows everything. He knows that the body the royal people found is not of the bad guy but without any reason given for this understanding. Also, he simply accepts the fact that his saviour during childhood is from future, but how he came to this conclusion, no one knows. He seems simply nonchalant when he discovers the parallel world. It all just seems totally unconvincing and unsatisfactory.

Oh, the usual Kim Eun Sook dramas’ trait of super fast romance. The hero is already head over heels in love with the heroine, even if she turns out to be different than how he imagined her to be. The heroine’s reaction to whatever he says becomes repetitive and annoying, and hero is in his own bubble where he doesn’t understand why the heroine is reacting that way. I’m just glad he is not rude and a jerk. So yeah, romance feels forced. Too grand and full of style (white horse and all), but lacks substance, emotions and proper pace.

Well, I do have many complaints here but I will keep watching for now because I’m interested in finding out more! And have little bit hope that things will get better from here.

6 thoughts on “First Impressions for ‘The King: Eternal Monarch’”