This episode was all about the consequences of the birth secret coming out in open. We also see Mi-ryung showing her selfish and arrogant side (as if we had any doubt about it) and suddenly craving for her daughter after abandoning her for all these years. There was very less cute. Huh.

Scene starts where it ended with mom and Soon-shin hugging and Mi-ryung watching them. She gets jealous and frustrated. She comes back home and her manager advises her to keep distance from their family and carry on like before.

At home, Yoo-shin is angry and says that whenever she sees Soon-shin, she is reminded of the fact that dad betrayed them. Mom and Soon-shin are back and grandma shows extra care towards her. Yoo-shin tells Soon-shin that she feels really uncomfortable with her. It must be difficult for her, but same is with Yoo-shin as well.

Soon-shin sleeps in mom’s room beside her. 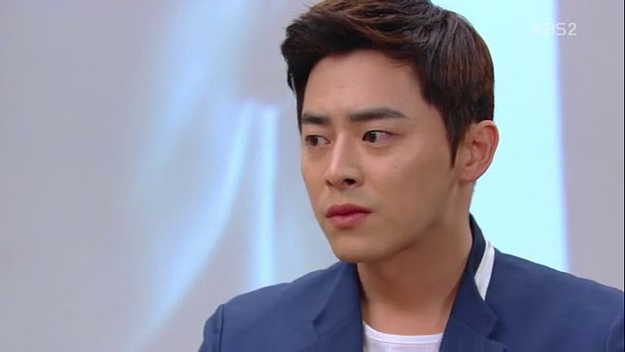 Next morning, Joon-ho’s mom inquires about the real identity of Mi-ryung’s daughter but he refuses to tell her.

Reporters again gather outside Soon-shin’s house. She goes out and tells them she has nothing to do with Mi-ryung. They start asking questions, but Joon-ho comes on time and takes her inside. He tells the reporters that no one will print the photos and also all interviews will be done through agency. She shouts at him that he must have told the reporters about her and also he knew about the press conference all along. Hye-shin tells her that he was really worried for her.

Joon-ho meets Mi-ryung and warns that every interview will be done through the agency and after their approval. He also yells as they told reporters about Soon-shin’s identity.

Jin-wook accompanies Hye-shin and Woo-joo to help them escape from reporters but to his disappointment, all reporters have left.

Chan-woo’s mom comes to his clinic to deliver some document and she meets Yi-jung there. Of course, she likes her and thinks that maybe he is dating her.

Mi-ryung meets Soon-shin and says that she needs to explain things but she answers back that she has nothing to do with her and not to meet her again.

Yun-ah waits for Mi-ryung at home, but she ignores her on coming back saying that she is tired.

Young-hoon calls Soon-shin to restaurant and commiserates with her by making her eat lots of delicious food. He says that she should vent out her anger and confront things than to keep them unresolved. Joon-ho sees them together and Yun-ah comes there all drunk. She also sees them and goes there and says to Soon-shin that she has a sister now and she should forgive Mi-ryung as she is so worried.

Chan-woo’s mom meets Yoo-shin on street and tells her that maybe he is dating president’s daughter, she is pretty and she met her by chance at clinic.

Yoo-shin is already furious and when she sees mom working at Chan-woo’s chicken restaurant, she becomes enraged. She takes mom back home.

Yoo-shin yells that mom always cares for Soon-shin. Doesn’t she hate her, she has come due to dad’s affair, so how can she feel sorry for her. Soon-shin hears all this.

Yoo-shin tells Soon-shin that she knows it’s not her fault, but she is having hard time seeing her and she can’t help it.

Chan-woo’s dad meets manager Hwang and tells him that Soon-shin’s family has suffered so much because of Mi-ryung and they were already having so much hard time after Soon-shin’s dad’s death. Manager suggests Mi-ryung to give them some money to feel less guilty. She declares that she will bring her daughter back and live with her.

Mi-ryung visits Soon-shin’s house and makes faces when she sees the condition in which she lives. She tells mom that she has worked hard in raising her daughter and gives her money, which she says is the token of her appreciation. And she wants to take her daughter back.