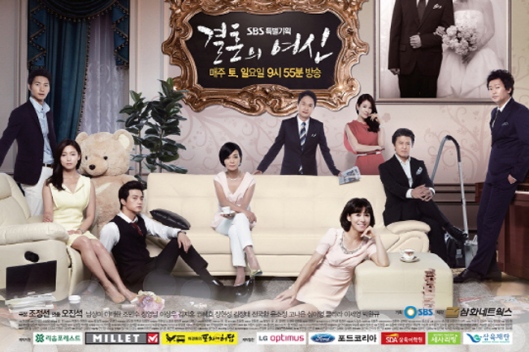 Only a day is left for the premiere of weekend drama Goddess Of Marriage and have a look at the new posters for the show that will portray four marriage/ love stories related to four women. Initially I was really excited about this show even when it is 32 episodes long (huh) and as there are many trajectories, it has the chance of meandering a lot. But still Kim Ji Hoon compelled me to give this a try and I thought we’ll be getting something light and funny. But the latest highlight on the storyline has turned me off for this as it says that the heroine, played by Nam Sang Mi, is engaged to Kim Ji Hoon but she meets a stranger, Lee Sang Woo, on some trip, attraction starts and she cheats on her boyfriend. She returns, but still keeps this a secret and continues her marriage thing. It’s not about who forms the OTP but how can I like my heroine when she is a cheater!!

Anyways, I recently realised that one of the actors in Dalja’s Spring (which has only one episode left for me to complete) is also starring in this drama and she is Jang Young Nam (whom I also saw in Level 7 Civil Servant, for which I watched only 2 episodes) and I think she is a fantastic actor. Also, I thought that I haven’t seen Lee Sang Woo in any show, but it turned out that he is the one who i found cute in 9 End 2 Outs as Soo Ae‘s first love or something like that (there were many actors in it, so I don’t quite recall the exact role.)

I’m again on the fence regarding Goddess Of Marriage until I get some good vibes about it. Till then, it’s a no-no in case we have the same plot as described in some reports. The drama will air on SBS.