A New Leaf is following the formula of slow and steady as it completes its first half. I’m loving it more and more with each episode. It is such a relaxed and smooth drama and I like everything about it except the scenes that involve too much financial-law based conversations that prove to be simply a cure for insomnia. But I’m as pleased as punch that with each new day, those boring scenes are getting reduced. Yay.

So Kim Suk Joo is slowly getting used to his new condition and it is such a pleasure to see him take every new struggle or problem with so much ease and calm. Kim Myung Min was so full-of-energy and kind-of-jerk and total opposite in his last drama King Of Dramas that I’m amazed that he is so different here, being thoughtful and cool and such a 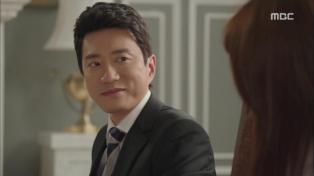 gentleman! I loved his interactions with fiancée Jung Sun and the way he is paying attention to her and their relationship. I was thinking that she might be your usual archetype character of second female lead but I’m happy to report that she looks like a normal, nice lady who is amazed to see the little bit compassion from her fiance. Basically, these two were having an arranged marriage but it’s not like they were totally indifferent and I can’t say about her but at least Suk Joo hoped for their love to grow after marriage. Maybe she did like him. And as we are talking about this, I have to say that I seriously get irritated during the scenes involving her family members. I hope they’ll be getting less screen time.

And finally, Suk Joo met his dog! His older relation with his dog shows that he was indeed warm to someone in his life. I also like his scenes with his father and I’m not able to comprehend the reason behind showing his father’s disease, which is Alzheimer’s’ and what its consequences could be.

But the cream of the crop is actually the awesome bromance between Suk Joo and bestie Park Sang Tae. The latter simply infuses humour  and warmth in all his scenes. Oh Jung Se is surely a scene stealer and thankfully, he knows now about his friend’s memory loss.

I was fearing that Ji Yoon’s character would only be linked to fighting for justice along with Suk Joo but it’s a relief that she has her own arc and growth. She took a case and worked hard for it, taking necessary guidance from her seniors and finally learning that everything cannot be according to how you want — she did win the case but also got suspicious about the man she saved and feels confused. She is in a dilemma as she wants to fight for right thing but then, it was a great experience for her to learn the possible areas where one can be wrong and also, this will give rise to her introspection of whether she wants to win or help the cause of righteousness. Last but not least, I was so ready for the usual heroic moment in her court scene with Suk Joo entering and saving the day by helping her at the last moment and I’m super happy that it did not happen and Ji Yoon was the one who completed her case and even won it. It’s another thing that she didn’t pay attention to all possible angles and that’s understandable as she is only an intern in the process of learning.

Young Woo is all ready to put Ji Won in place of Suk Joo who is all ready to leave the firm. I’m excited to see how things will turn out now. Jin Yi Han has got only limited time till now but he is brilliant and so natural in his acting and I love his voice. By the way, the show is full of actors with amazing voice!

Coming onto the romance aspect, I’m hoping for some shake ups as Suk Joo, Ji Yoon, Ji Won and Jung Sun will undergo more emotional changes and yes, I’m rooting for our main leads because I love it when romance takes place at the most unlikely place!

2 thoughts on “A New Leaf, Episodes 5-9: It keeps getting better”