Fated To Love You is all about the lovely couple at its heart. And the various landscapes of emotions the drama takes you to — you laugh, cry, feel giddy and gleeful with its eventful journey.

The show has a simple and lucid script with marriage of convenience as its theme. It is a Korean remake of the Taiwanese drama by the same name. Lee Gun and Mi Young get married after she becomes pregnant due to an inadvertent one-night stand between the two. Initially hesitant and reluctant, the aroma of love spreads without notice and we witness the two falling for each other in a sweetest way possible.

Fated To Love You is an ideal rom-com as it comes with heaps of comedy (slapstick and cheeky) and romance that can give you toothache with its sweetness. Here and there all through the drama there are wonderful fragments where we see the two leads falling in love and growing with each other’s company. There is so much attraction and romantic tension at times and I kept on feeling butterflies in my stomach. I also love the meta elements used in the show — most of them related to Jang Hyuk. 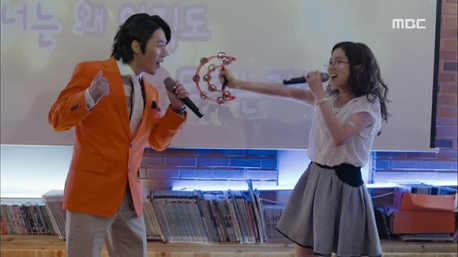 As I already said before, the main strength of the show comes from its leads and their impeccable chemistry. I love that they defy the initial expectations viewers might have from the description — just another run-of-the-mill love story between a cold jerk and a meek candy girl. Gun is a very interesting man who is eccentric in his gestures but then becomes the most thoughtful and sensitive person in another moment. It is also great that we see how attracted he is towards his wife, physically as well as emotionally. It is beautiful to see how he always encourages her. Same can be said for Mi Young. She may not be your badass or fierce heroine but she is strong in a quiet way. She upholds her values and is full of dignity, kindness and understanding. She knows how to remain firm and tough when needed but she is a bundle of love and affection at the same time. Jang Hyuk and Jang Nara are a dream couple and this reunion is one of the best things that ever happened in dramaland. These two have acting styles that compliment each other to perfection and they balance each other’s character’s personalities with one being the loud one and the other an understated one.

The other characters that I loved include Secretary Tak as the best buddy to our hero. Their funny bromance was a delight. Mi Young’s mother was another great character that grew on me so much. I started off with not liking her, which soon turned into love, especially with the heartwarming relation she had with Gun and I liked how the show depicted her dilemma later on. I liked Lee Yong as Gun’s half-brother whose change of heart was one of my favorite things. He along with Secretary Tak gave lots of hilarious moments in the show. Gun’s doctor and lawyer also turned out to be other characters that stood out.

I admit that I was fairly disappointed with the story arc of the second leads. They simply filled their spots and never appealed to me much. Especially Se Ra who I couldn’t understand properly. She was more like a filler as she was bad before, then turned into a good girl (or so I thought) and the again turned bad. Whatever. Daniel was the perfect caring second lead but without much interesting to do. I also think that grandma didn’t have that much impact in our couple’s life as I expected.

The heavy melodrama in the later episodes where Gun takes the path of noble idiocy make the show lose some of its shine. I think the issue should have been brought a bit later as I wanted to see more lovey-dovey-ness between Gun and Mi Young. And also it lasted longer than required. But the emotional connection was so strong that I didn’t mind it that much. It also helped that there were lighter moments sprinkled in between that kept the mood easy. I loved the soundtrack as well which might look overplayed to some but I was absolutely attached to it. The drama surely has a solid heart. What the drama made us suffer in its heavy arc, it compensated it with its last week which was pure gold for the fans, having lots and lots of cuteness.

The performances and moments strike a chord in FTLY with Jang Hyuk making Gun a very memorable character. His dialogue delivery, body language, facial expressions — all are in top form and he looks hot in all the hairstyles given to him. And who can forget his laugh! Jang Nara is a picture of grace. She melts into her role with so much ease and is charming as a shy but cute Mi Young. Choi Jin Hyuk and Wang Ji Won are fit in their parts and add more to it than written on paper. Then there are bits and pieces players in supporting roles who combine to make the drama truly memorable like Choi Dae Chul, Choi Woo Shik, Song Ok Sook and rest of Mi Young’s family.

Bottomline: Fated To Love You is a delicious drama flavoured with heartfelt emotions of love encompassed with humour and heart.